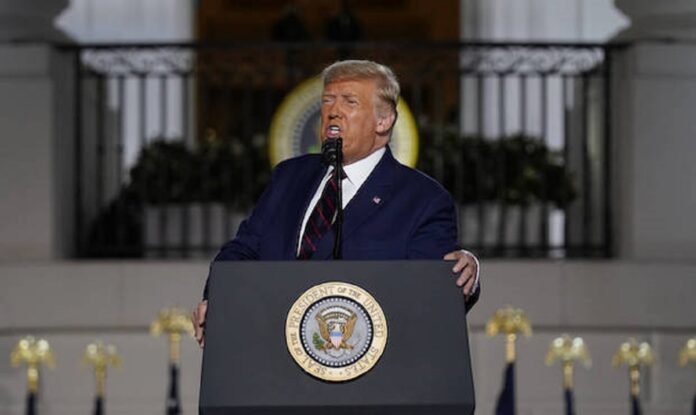 Two top members of President Trump’s reelection campaign accused the Commission of Presidential Debates of being biased in favor of Democratic candidate Joe Biden on Thursday, while also highlighting a slew of nonscientific polls indicating the president won this week’s debate.

“The Commission on Presidential Debates has been in the news for much of the week. Most times when the CPD is described, they’re referred to as a ‘non-partisan organization,’” Trump campaign manager Bill Stepien said in a conference call with reporters. “Those characterizations could not be further from the truth.”

To back up his assertion, Stepien proceeded to identify members of the commission’s leadership, which has made statements critical of Trump, served in partisan positions or donated to Democrats. The CPD is a nonprofit corporation that has sponsored every presidential debate since 1988. Its leadership is made up of both Democrats and Republicans.

The call came after a Wednesday statement from the CPD saying it “intends to ensure that additional tools to maintain order are in place for the remaining debates.” That promise to change the format came after Trump repeatedly interrupted Biden in a debate that quickly devolved into a shouting match on Tuesday.

Trump’s performance during the debate has been roundly criticized by Republicans and Democrats alike. The president, however, tweeted Thursday that he had won the debate “easily” and that he would not agree to any rule changes going forward.

“Why would I allow the Debate Commission to change the rules for the second and third Debates when I easily won last time?” Trump tweeted.

Trump senior adviser Jason Miller, who joined Stepien on the call Thursday, reiterated that the president is opposed to any alterations to the planned debate format.

“President Trump is ready to go. There shouldn’t be any changes. We do not want any changes. This is purely a move by the Biden camp and their allies in the CPD,” Miller said.

Miller suggested Biden’s team requested specific changes — including having opening and closing statements — that would reduce the amount of “open discussion.” He also said the commission might try to equip the debate moderator with a “mute button” to cut off interruptions.

The CPD and the Biden campaign did not immediately respond to requests for comment.

During the call, both Stepien and Miller made personal attacks on individual members of the CPD leadership. Stepien, a veteran political operative from New Jersey, pointed to an interview one of the group’s co-chairs, Frank Fahrenkopf Jr. gave to Nantucket Magazine last month. In that interview, Fahrenkopf — a former chairman of the Republican National Committee — said, “What I learned in 2016, which was an odd year, was that the American people are not necessarily going to vote for who they think is the smartest person.”

Stepien suggested this demonstrated clear bias against Trump and criticized Fahrenkopf for spending summers on Nantucket, a wealthy enclave in Massachusetts.

“I’m more of a Jersey Shore kind of guy. Frank is a Nantucket guy, apparently,” said Stepien, whose firm has been paid between $10,000 and $15,000 per month by the Trump campaign.

Stepien also listed Democratic donors on the CPD’s board. He noted that former Citigroup chairman Dick Parsons, a CPD board member, served on President Obama’s transition team after the 2008 election.

“The Democrats who serve in the leadership of the CPD are clearly supporters of Joe Biden. … They endorsed Democrats. They donate to Democrats,” Stepien said. “The Republicans on the board of the CPD aren’t very different. Listen to their words, read their comments.”

Miller echoed Stepien’s critiques of the CPD and accused its leadership of being out of touch with everyday Americans.

“Rather than a cross-section of America, this group very much comes across as what you might see at an evening gala at the Metropolitan Club in D.C. For the most part, these are permanent swamp monsters … not representative of America as a whole,” said Miller, who has worked as a registered lobbyist in Washington.

Miller further incorrectly suggested only “one member” of the group’s board is a Republican.

The pair of top Trump campaign officials also defended the president’s performance in the debate by citing the fact he “won big” in a number of online polls.

The polls cited by the Trump campaign as evidence of the president’s debate victory were largely nonscientific surveys where web users were invited to click on the candidate who they felt won the debate. These polls are notoriously easy to manipulate and Trump has been accused of hiring consultants to game similar surveys in the past.

A trio of more reputable polls conducted by major media organizations all found that most respondents believed Biden won the debate. Miller and Stepien, however, stayed focused on the online results.