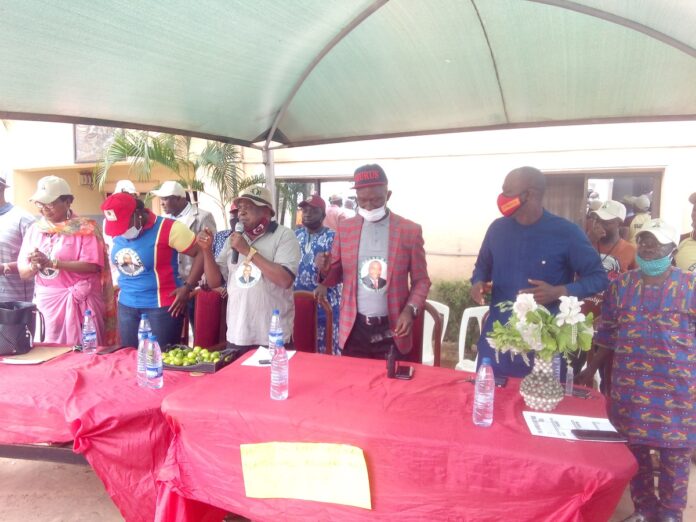 The people of Enugu West Senatorial District on Tuesday declared that Governor Ifeanyi Ugwuanyi’s administration has brought peace and progress to the state.

It also said that Ugwuanyi’s administration has made peace a capital project in the state to ensure that the residents have conducive atmosphere to do their businesses.

Speaking through a group, Enugu West Patriotic League, the people said that the Governor’s peaceful disposition and quiet mien was sinking down the line in the state as virtually everything in Enugu state, including elections were being done in an orderly and peaceful manner.

“The Governor has done over 600 kilometers rural roads in Enugu state and has made Enugu to be number one in the International Public Sector Accounting Standards in two quick successions, 2018 and 2019 and has paid the backlog of pension since 2004.”

At the meeting where many personalities in the League including the President General, Hon. Paul Anikwe; State Commissioner of  Transport, Hon. Mattias Ekweremadu; Hon. Chukwunoye Okereke, SSA to Governor on Public Communicatios; Lady Chinyere Gbugu; Mr. Lucky Oshi from Aninri; Chief Livinus Nnolum from Oji River; Hon. Lazarus Ugwu from Awgu and Hon. Uche Obute from Udi, spoke, the Governor was urged to maintain his mark and if possible better it the remaining years of his administration.

In a written felicitation to the Governor signed by the President General, Anikwe, the League also said, “The election (PDP State Congress) is the first of its kind with no semblance of rancor, acrimony or recrimination. We stand firmly with and by His Excellency and our support for him is unalloyed and unflinching.

“We cannot thank Your Excellency enough for all you are doing in this state. Posterity will remember you as all your good deeds are written in golden letters in the annals of our dear state history.”