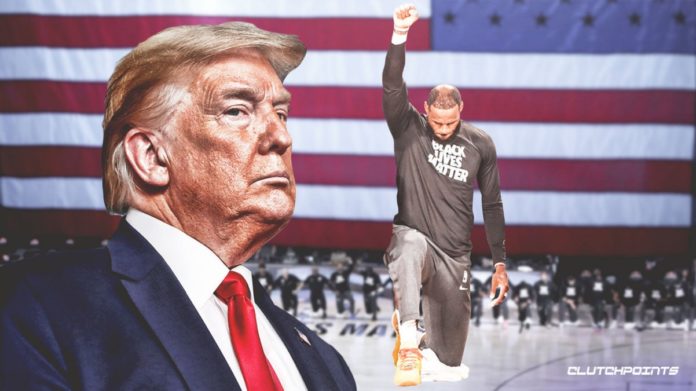 Everyone knew it was coming. As the vast majority of NBA players and coaches have kneeled during the national anthem in protest of police brutality and support of the Black Lives Matters movement, there would be politicians/talking heads who saw the opportunity to blast the league and score points with their base. They couldn’t pass it up.

In a phone call into Fox and Friends on Wednesday morning, the president ripped the NBA and its players for taking a knee during the anthem. It came with the over-the-top claims that Trump throws out like bread crumbs to pigeons.

Ratings for the NBA games from the restart are way up — TNT drew double its usual regular-season audience for the opening night games, and ratings have been up about 14% across the board for the games from Orlando.

Kneeling for the anthem is just a part of the social justice message from the league. The league has written “Black Lives Matter” on the court, players could choose to wear a number of social justice messages on the nameplate on the back of their jerseys, and players have spoken about causes in countless television and other media interviews.

More than talk, players have put their money behind causes, such as LeBron James pushing to register Black and other people of color to vote, and push back on voter suppression efforts.

Trump wasn’t done being wrong or over the top, mentioning himself in the same breath as Abraham Lincoln.

The Pelicans’ J.J. Redick summed up most people’s thoughts a week ago in an interview with Yahoo Sports, reacting to a different Tweet from the president.