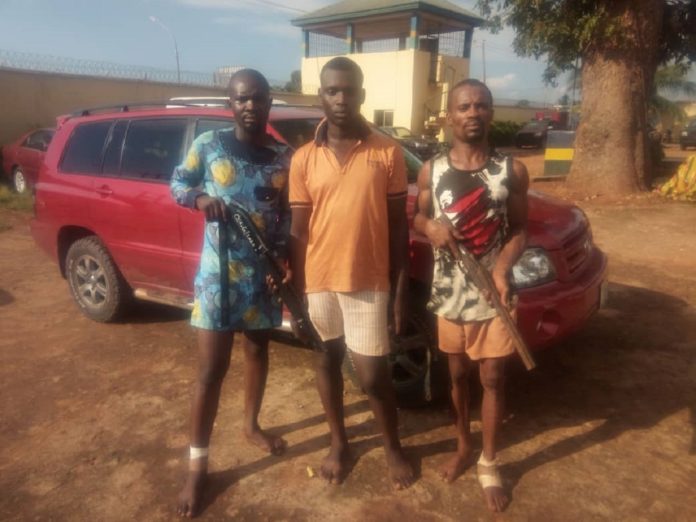 The Anambra state police command has busted a three-man gang of car snatchers and recovered a Toyota Highlander SUV with registration number APP 49 FM which was snatched at gunpoint on the March 23,2020 at about 8:20pm, along the Ekwulobia Road, Aguata council.

The vehicle with other valuables was said to belong to one Christopher Oraukwu ‘m’ aged 54 years.

According to a statement from the command signed on behalf of the Commissioner, CP John Abang by the Police Public Relations Officers(PPRO), SP Haruna Muhammed, “following the report, police operatives attached to the Command Special Anti Robbery Squad(SARS) swung into action and had on May 23,2020 arrested the following suspects, -Chidi Ugoji ‘m’ aged 31years of Ukpo, Dunukofia LGA; Okoye Onyebuchi ‘m’ aged 34 years of Umunachi and, Onwe Chigozie ‘m’ aged 22years of Ikwo, Ebonyi State.”

The police spokesman noted that the “suspects were arrested at their hideouts in Achalla/ Nkpor areas and have voluntatily confessed to the crime.”

Amongst the exhibits reportedly recovered in their possessions included one pump-action gun, one cut-to-size double barrel gun, four live catridges, one Mitsubishi L300 bus used by they normally use for their robbery operations and the snatched Toyota Highlander SUV now bearing a new registration Number JJT 664 MR.

He said that they would be charged to Court as soon as investigations are concluded.