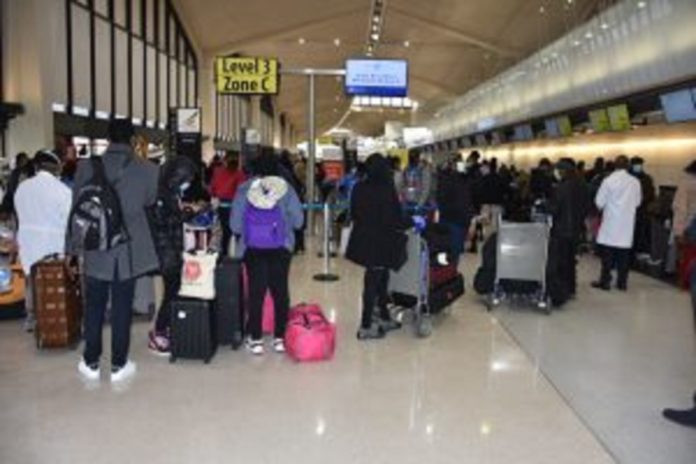 The first batch of Nigerians stranded in the United States due to the coronavirus (COVID-19) pandemic is on their way back home.

The News Agency of Nigeria (NAN) reports that 160 Nigerians, including eight infants, made the first batch of evacuees.

They are returning aboard an Ethiopian Airlines Boeing 787 aircraft under the special flight arrangements by the Federal Government for nationals stranded abroad.

In line with the government’s pre-departure infection prevention control guidelines, temperature checks were conducted on the passengers by a special medical team.

The plane departed the Newark International Airport, New Jersey, on Saturday around 8:20 p.m. local time (1:20 a.m. in Nigeria on Sunday).

It is expected to arrive at the Nnamdi Azikiwe International Airport, Abuja, around noon on Sunday.

On arrival, the evacuees would be quarantined for 14 days in Abuja before leaving for their respective destinations in the country.

At the airport to coordinate the departure activities were officials of the Nigerian consulate in New York, led by the Consul-General, Mr Benaoyagha Okoyen.

Also, around to bid the evacuees farewell was Amb. Tijani Muhammad-Bande, President of the United Nations General Assembly and Nigeria’s Permanent Representative to the UN.

He was joined by Amb. Samson Itegboje, the Deputy Permanent Representative of Nigeria to the UN, among others.

Speaking to newsmen, Okoyen lauded the evacuees for their cooperation and orderly conduct throughout the process.

“It was successful and we are happy that everything was orderly. As you must have observed, the boarding was also orderly,”  he said.

Some of the passengers, who spoke to NAN, expressed gratitude to the Federal Government for the special flight arrangement.

Dr Jatto Ibrahim, a consultant orthopedic surgeon at the  Federal Medical Centre, Jigawa, said he was in the U.S. for a training programme in February.

Ibrahim said he was stranded after his return British Airways flight scheduled for April 10 was suspended following  Federal Government’s travel restrictions on U.S. and 12 other countries with high COVID-19 burden, on March 18.

Another evacuee, Mr Chidi Ikegbu, a businessman from Imo, said a business engagement took him to the U.S. in March.

However, Ikegbu, who travelled through Ethiopian Airlines, said he had to pay for the special flight after the airline refused to let him use his return ticket for the flight.

“I called the airline but they said our return tickets were valid until December, and so we had to wait for the return flight after the restrictions were lifted in Nigeria.

“They said but if we wanted to go now through the special flight, then we had to pay for it,” he said.

Reacting to this, Mr Million Legesse, the Traffic and Sales Manager of Ethiopian Airlines, New York, said any of the evacuees with a return ticket could use it for a U.S.-Nigeria flight in the future.

“But if the passengers are no longer going to use the return tickets, we would refund them based on our refund policy,” Legesse said.

Dr Iwuozo Obilo, a U.S.-based Nigerian medical doctor, who was part of the medical team that screened the passengers, said their temperatures were normal.

“Temperature taking is one of the criteria to determine COVID-19 symptoms.

“Although, it is not enough because there are people with the virus who are not symptomatic, it will give us an overview of their health.

“Since, they will be be quarantined for 14 days in Nigeria, at least we are sure none of them has fever that will affect them during the flight,” Obilo told NAN.