Home World News 5 takeaways from the Democratic debate in Nevada 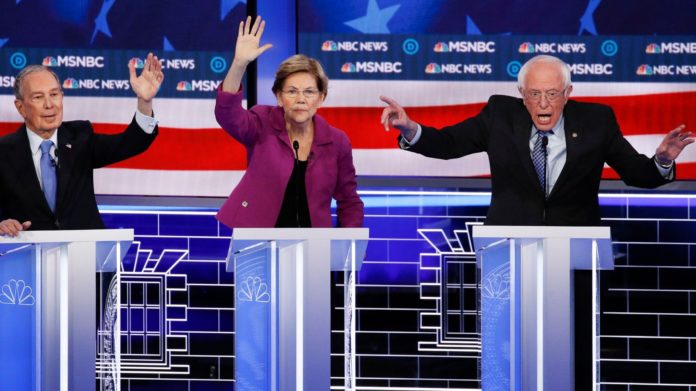 The quickened pace of the Democratic presidential primary brought six candidates together in Las Vegas on Wednesday night for the ninth debate of the cycle, just days before Nevada holds its caucuses. It marked the first presidential debate for former New York City Mayor Michael Bloomberg, who has avoided the early states but couldn’t avoid his competitors’ fire on the debate stage. Whether it was Bloomberg’s presence or the understanding time might be running out for some of the campaigns, this was the most contentious Democratic debate of the cycle by a wide margin.

Here are five takeaways from the Vegas debate:

Since the Democratic debates started back in June, they have been largely cordial and focused on policy. But on Wednesday night, with delegate-rich Super Tuesday less than two weeks away and the sense that Sen. Bernie Sanders might be pulling away from the pack, the candidates unloaded on one another. Many presidential contenders had protested the elimination of the donor requirement that would have likely kept the self-funding Bloomberg off the stage, but they seemed to relish the opportunity to go after the billionaire who has been blanketing the airwaves of Super Tuesday states with ads.

Sen. Elizabeth Warren led the attacks against Bloomberg but also worked to contrast her record with the others on stage. The long-simmering hostility between Pete Buttigieg and Amy Klobuchar boiled over multiple times. Sanders, meanwhile, dealt with questions about democratic socialism, his health troubles and his aggressive supporters, which his opponents have tried to turn into a campaign issue.

2. A rough debut for Bloomberg

“I’d like to talk about who we’re running against, a billionaire who calls women ‘fat broads’ and ‘horse-faced lesbians,’ and, no, I’m not talking about Donald Trump, I’m talking about Mayor Bloomberg,” said Sen. Elizabeth Warren to open the debate, the beginning of what could easily be described as a pummeling of Bloomberg.

Joe Biden hit on Bloomberg’s stop-and-frisk policing policy that disproportionately targeted minorities and on his comments calling Obamacare “a disgrace.” Sanders pointed out that Bloomberg endorsed George W. Bush in 2004 and said his personal fortune, which is estimated to be roughly $60 billion, was immoral. “Let’s put forward somebody who’s actually a Democrat,” added Buttigieg.

Bloomberg pushed back, but his worst moment came in a discussion of the nondisclosure agreements the many women who had sued him and his company for sexism had signed. Under pressure from Warren and Biden, Bloomberg refused to say he would dissolve the agreements and used some indelicate language in describing the situation.

“We have a very few nondisclosure agreements, none of them accuse me of doing anything other than maybe they didn’t like a joke I told. These were agreements between two parties that wanted to keep it quiet and that’s up to them,” he said, adding, “They were made consensually and they have every right to expect that they will stay private.”

Warren was solid in the New Hampshire debate earlier this month but far from spectacular this time out, saying afterward, “I just didn’t say enough, didn’t fight hard enough, didn’t tell you how bad I want this and how good we could make it if we just come together.” But it would be difficult for an observer of the Las Vegas debate to say that the Massachusetts senator didn’t fight hard enough on Wednesday.

Warren was Bloomberg’s major antagonist. At one point, the former mayor’s Wikipedia entry was edited to say his “cause of death” was Warren. She also criticized the health care plans of Klobuchar and Buttigieg and criticized Biden for some positive comments he made about Sen. Mitch McConnell while serving as vice president. But Warren was not always on offense, and she defended Klobuchar for forgetting the name of Mexican President Andrés Manuel López Obrador during an interview this week, saying that slipping on a name one time doesn’t mean she doesn’t understand policy.

From a fundraising standpoint, Warren’s night seems to be a success, as her campaign announced they had raised over a million dollars in under two hours. A potential problem for Warren? Early voting has already started in a number of states, including Nevada, meaning many cast ballots before seeing this performance.

4. Klobuchar and Buttigieg throw down

One of the consistent subplots of the primary thus far has been the battle between Klobuchar and Buttigieg for the moderate Democratic vote. Standing next to each other Wednesday night, the pair went at it over their records, experience and aptitude. Buttigieg pushed Klobuchar on her votes to confirm Trump-appointed officials and judges.

“If you’re going to run on your record in Washington, then you’re going to have to own those votes, especially when it comes to immigration. You voted to confirm the head of Customs and Border Protections under President Trump, who is one of the architects of the family separation policy,” Buttigieg said in reference to Klobuchar’s vote to confirm Kevin McAleenan to head the CBP. McAleenan later became the acting head of the Department of Homeland Security. After the exchange, Klobuchar said, “I wish everyone were as perfect as you, Pete.”

Earlier in the evening, Buttigieg criticized Klobuchar for forgetting the name of the Mexican president. “Are you trying to say that I’m dumb — are you mocking me here, Pete?” Warren shot back. “I said I made an error. People sometimes forget names. I am the one that has … the experience based on passing over 100 bills.” Klobuchar also hit Buttigieg on his failed run for Indiana treasurer in 2010, the former mayor’s only attempt at state-wide office so far.

Sanders has had a good week in the polls, as a number of national surveys showed him stretching out double-digit leads over the field. He’s looking formidable in South Carolina and Nevada, potentially giving him popular vote victories in the first four primary states.

While other candidates made attempts to go after the frontrunner, Sanders escaped relatively unscathed. Buttigieg attempted to paint him as polarizing early in the debate,  but Sanders responded by saying it wasn’t polarizing to fight for the working class. He faced questions about releasing his health records and attacks from some of his supporters on a Nevada culinary union, but Sanders pushed back. Bloomberg tried to paint him as a hypocrite for being a socialist who owns three homes, but it remains to be seen how voters will interpret that attack from someone whose net worth is roughly 25,000 times that of the Vermont senator.

Sanders was also the only person to commit to stating that the person who arrived with the most delegates at this summer’s Democratic National Convention in Milwaukee should be the nominee, even if they fall short of a first-ballot majority. The others said they supported letting the process play out, which could involve superdelegates voting on a second ballot if no candidate can secure a majority of pledged delegates via the primary process.