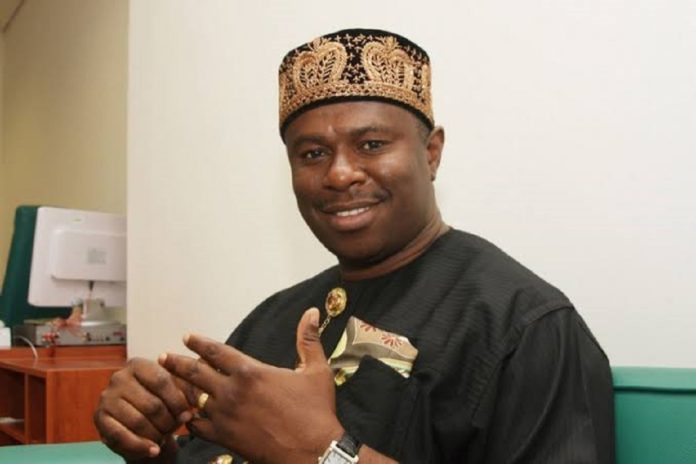 ….Pay Attention to Nursing Your Self-Inflicted Political Accident and Desist From Incessant Attacks on Amaechi

Chief Eze Chukwuemeka Eze a chieftain of the ruling All Progressives Congress and former National Publicity Secretary of the defunct New Peoples Democratic Party (nPDP), but most importantly, a close associate of both the Minster of Transportation, Rt. Hon. Chibuike Rotimi Amaechi and Senator Magnus Ngei Abe, has expressed shock over attempts by Abe to rewrite the history and genesis of the crisis that engulfed the Rivers APC which culminated in the exclusion of the party from the 2019 general elections.

In a statement made available to media houses on Sunday, Chief Eze recanted his earlier stand never to comment on any issue pertaining to Senator Abe and his crave to relegate the party and his benefactor, Rt. Hon. Chibuike Amaechi, to a state of nothingness and mere nihility after listening and perusing through recent  interviews granted the former federal lawmaker by AIT and Vanguard Newspaper, as well as a Press statement issued by his Media Aide, where he dissipated much energy, trying hard to upturn the rudimentary issues that sparked the crisis in the Rivers APC. His misrepresentation of facts made it imperative for some of us who are knowledgeable enough in events that led to the impasse to speak up and set the records straight for the good of the reading public.

Recall that Abe had in an interview with Vanguard Newspaper, titled, “How my fight with Amaechi started~~Chief Senator Magnus Abe opens up!” preempted, predicated and premised on the Amaechi’s visit to his Abuja residence where he alleged that Amaechi asked him to kill any hope of becoming the state governor under the APC in 2019 was the genesis of the crisis of Rivers APC;  whereas, his press statement issued by PARRY SAROH BENSON, his Media Aide quoted the Senator from his AIT Interview as saying: “…The origin of this whole problem was the disobedience to Court orders that brought the face-off between Rivers APC and the Nigerian judiciary. It has nothing to do with a third party. It has to do with behaviour of the people in the party…” These conflicting positions adds credence to the assertion that Abe is skilled in mudslinging and malevolent enterprise.

It is unfortunate that Abe will like to rewrite the history of the crisis of Rivers APC by postulating that the crisis commenced from the visit of the Minister to his house which was primarily to plead with him to allow the party to be rebuilt. Eze opined. He further quoted Dike Princewill, a stakeholder in the politics of Rivers State, capturing what transpired during Amaechi’s visit to Abe, “My big friend and brother, Sen.Magnus Abe is begging the issue in his narrative. The real problem erupted when people started nursing ambitions that were creating schism in the  party that was in dare need of repositioning. CRA’s only advise then was that there has to be a party first before ambitions could be realised. Let’s know when the rains started in order to seek proper shelter. This is the same advise that Alhaji Atiku Abubakar has recently canvassed in order to reposition the PDP ahead of the 2023 elections. If there was discipline in the rank and file of  Rivers APC at that time and CRA, the leader’s advise was heeded, the party would have been a winning machinery. Vaulting ambitions made reasons to take flight. Sad.”

Eze said Dike’s position succinctly captures the issue, not Amaechi’s visit, not even disobedience to court orders, because selfish interests and inordinate ambitions led to the floodgate of litigations that resulted to court orders.

Senator Abe’s position that a faceoff between the Judiciary and the APC ignited the crisis is a mere myth, emanating from the abyss. Eze reiterated that the crisis actually started when Senator Abe failed to clinch the APC ticket during the 2014 party Primaries which led to the mobilisation of youths from the Ogoni axis to protest the choice of Dr. Dakuku Adol Peterside, as the consensus candidate for the 2015 gubernatorial election.

Report had it then that the mobilised Ogoni youths marched through the popular Azikiwe Road to the main gate of the Government House in Port Harcourt, insisting that the then Governor Amaechi betrayed the Ogoni interest by ‘anointing’ Peterside as the governorship candidate of the APC.

The protesters, who had earlier blocked major points of the East-West Road in Eleme Local Government Area, chanted war songs, even as some of them threw stones that damaged some vehicles parked near the Government House. Most of us including the then Governor Amaechi were held hostage in the Government House by the protesting Ogoni youths

Eze quoted the Public Relations Officer of the Movement for the survival of Ogoni People (MOSOP) then, Legborsi Esaen as stating,  “Amaechi  has betrayed the Ogonis. We have resolved to support any party that presents an Ogoni son as its governorship candidate. We are no longer prepared to play second fiddle in the politics of Rivers State. It’s either governorship or nothing”

The Ogonis were affirmative when they further stated, during the protest, “Governor Amaechi made us to defect from the PDP to the APC with hope to give us the governorship ticket..  he made us to fight the Federal Government. Governor Amaechi deceived us into following him and now he wants to marginalised us. Amaechi used us and dumped us.  Why will he want to make somebody (Dakuku)  from Opobo a Governor? Opobo is a single community. They are a minority.  Why will he want us, the Ogonis who have four four Local Government Areas to concede to a minority?  So we are saying that an Ogoni man must become the Governor of Rivers State in 2015”

To give credence to the stand of the Ogoni as stated above, a key stakeholder in the politics of Rivers State and one of the pivotal Pillars of the so called Abe’s camp, Chief Allwell Onyesoh after five years of this historical protest stated recently in an interview with the Vanguard Newspaper and I quote, “…Magnus Abe was the standout card. We needed a man much mature, competent and had the support base to confront Wike. Wike is from Ikwerre with four LGAs, Abe, Ogoni, with four LGAs too. Then-governor (Amaechi) brought Dakuku from Opobo, the smallest LGA, if I am not mistaken. He brought running-mate from another small ethnic group – Engenni – who wasn’t even politically experienced”. Chief Oneysoh one of the great Irokos of Rivers State politics went further to insinuate, “As a political party, we have the most lucrative offices. One of them is Director, Operations of NPA. People supply water to ships, clean NPA; do all kinds of things in wharfs. All those you can use to employ massively. What of NIMASA, what of railway? Sam Sam Jaja heads the board of a higher institution, are there no contracts there? You want to win election? Opobo, a tiny place, Dakuku is from there. Sam Sam Jaja is from there and a place as large as Etche and Omuma with over two hundred thousand voters, not one recognition. How do you take care of only a few and expect the majority to vote for you?”

Abe and his group after failing to clinch the 2015 ticket of APC hatched a deadly plot to sabotage the candidature of Dr. Petetside by after been mobilised for the elections stayed back at Port Harcourt without going back to their various constituencies to canvass for votes for APC with the idea that if Dakuku fails to win the 2015 election he Dr Dakuku will not go for a second term in 2019 thereby creating an opportunity for Abe to clinch the party’s ticket by then. Sadly for him and his co-travellers none of these plots worked out as it would have been foolhardy to trust such a character that sabotaged the party in 2015 to be given the party’s ticket by 2019.

Eze highlighted that this is the beginning of Abe’s fight against Amaechi and the party, and not the erroneous impression being presented to the public by Abe and his misguided group blaming everything on Amaechi’s visit to his house and the alleged face-off between APC and Judiciary.

By all the above accounts, nobody should be further deceived by the antecedents and antics of Abe and his group using incidents that don’t relate to their reasons of destroying a political and personality that played key roles in whatever they are today in politics.

On the way forward, Eze supports the position of Magnus Abe aptly captured by Chief Onyesoh when he stated, “…If we, too, after so much and nothing is happening, decide to move, that won’t make us bad people. If we can no longer organise ourselves and the powers-that-be are not helping matters, we will look at those who are organised if we must continue to play the game. There will be realignment of forces.”

We understand all these game plans and plead with Abe and his group to leave Amaechi and those who are still interested to reposition the party for a better future for Rivers State and her teeming populace.

Eze expressed sadness that self-inflicted affliction could make Abe deny his historical statement thus “I am the highest political investment of Amaechi” made in a public fora, and now deceiving the public to believe that he meant that Amaechi is their collective political investment.”

Eze quoted Abe as saying, “contrary to the claim of Senator Andrew Uchendu that he was personally present at a meeting in Amaechi’s house where Senator Abe claimed that he was the greatest investment of Rotimi Amaechi, Abe said: “That statement was made at the heat of the crisis, at a rally in my village. The pictures are there. What I had on paper was that Amaechi is our biggest investment in the politics of Nigeria but when it came to the time to say it, I decided not to say it that way because I was looking for peace.”

If Abe whom Amaechi influenced his nomination as a Commissioner in Dr Odili’s administration, appointed him the Secretary to the Rivers State Government, influenced his Senatorial ambition on two occasions to the detriment of other Ogoni sons is not the highest political investment of Amaechi, must Amaechi also nominate him as the next President of Nigeria for him to accept what Amaechi has done in his political life and history? Eze queried.

Eze advised his good friend Abe to retrace his steps and do the needful so that he can get back his politics on track.