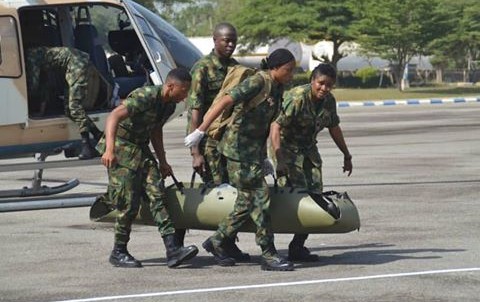 The Nigerian Air Force (NAF), in partnership with the Office of Security Cooperation of the United States Department of Defence (OSC US DOD) has trained personnel on Casualty Evacuation (CASEVAC).

Air Commodore Ibikunle Daramola, NAF Director of Public Relations and Information, disclosed this in a statement on Sunday in Abuja.

He said that the partnership was part of a 4-Phased Aerial Patient Movement Programme, to reduce casualty mortality rate at the point of injury and increase patient survivability during transport.

Daramola said the rigorous training now in its third phase, was conducted at the 063 NAF Hospital, NAF Base Abuja.

He said the training was aimed at further enhancing the capacity of NAF personnel, to provide effective aeromedical evacuation and advanced life support services within Operation LAFIYA DOLE and other Theatres of Operation across the country.

Daramola quoted the Chief of the Air Staff (CAS), Air Marshal Sadique Abubakar, as saying that the training was also aimed at developing the NAF’s capacity in Flight Medicine and Aerial Movement.

He said the training was also a part of the NAF’s efforts to enhance the capacity of its medical personnel to be more effective and efficient in the performance of their duties.

” The NAF has embarked on massive upgrading of NAF Medical facilities across the country,

” In addition, medical personnel have been enlisted and recruited into the Service to man these facilities.

“To enhance professional performance of the personnel, they undergo robust and result-oriented training; one of such programmes is the Aerial Patient Movement Training,“he said.

The Air Chief urged the participants to make the best use of the training with a view to applying the knowledge gained to save lives, thereby boosting troops’ morale.

He said that Abubakar was represented by the Director of Operations Headquarters NAF, AVM Idi Lubo, at the closing ceremony of the third phase of the training,

Earlier, the Chief of Medical Services, who was represented by the Director Clinical Services, Air Commodore Adedoyin Oyenusi, said that the CAS had paid significant attention to the general welfare of NAF personnel through several strategies.

He said this included the upgrading of NAF Medical facilities across the country as well as the enhancement of the quality of healthcare services provided to personnel and their families.

Adedoyin disclosed that the Aerial Patient Movement Training has helped to increase the pool of NAF medical personnel available for medical evacuation missions.

During the training, the 45 participants, drawn from both NAF and the Nigerian Army, acquired lifesaving first-aid skills in addition to familiarizing themselves with techniques to properly load patients on helicopters and care for them in-flight.

NAF helicopter pilots were also trained by US instructors on how to effectively plan and execute CASEVAC missions.