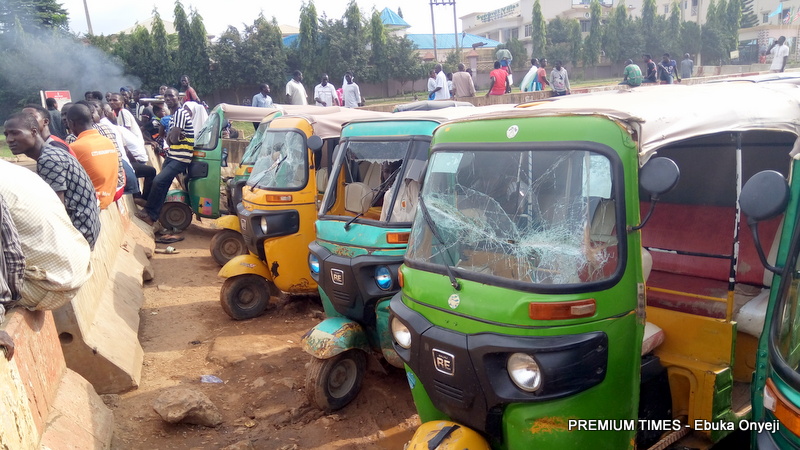 The FCT Ministerial Task Team on Traffic Control, was attacked by an angry mob on Thursday while evacuating an illegal tricycle( Keke NAPEP) park and mechanic workshop at the Nyanya bridge interchange.

News Agency of Nigeria (NAN) reports that the operation which was to rid the highway of distortions and environmental nuisances turned violent, when some of the affected people and sympathisers began throwing stones at the team including journalists covering the exercise.

The mob destroyed many operational vehicles of team and the windscreen of a car belonging to the Chairman of the task team.

NAN correspondent who was at the scene of the incident observed that most the people affected by the operation were the Keke NAPEP operators, technicians and petty traders, who allegedly turned the place into makeshift workshops, shopping centre and food courts.

Briefing newsmen after the exercise, the Chairman FCT task team, Mr Ikharo Attah, who described the incident as unfortunate, said his team would not be deterred by the attacked.

He said the FCT project was a responsibility that must be owned and key into by everyone, because FCT was very important to all Nigerians.

The Head of Operations, Abuja Environmental Protection Board (AEPB), Kaka Bello, assured that the cleared site would be handed over to Parks and Recreation Development of the FCT Administration, for maintenance.

Bello maintained that the AEPB would sustain the effort to ensure fully enforcement of law in the area.