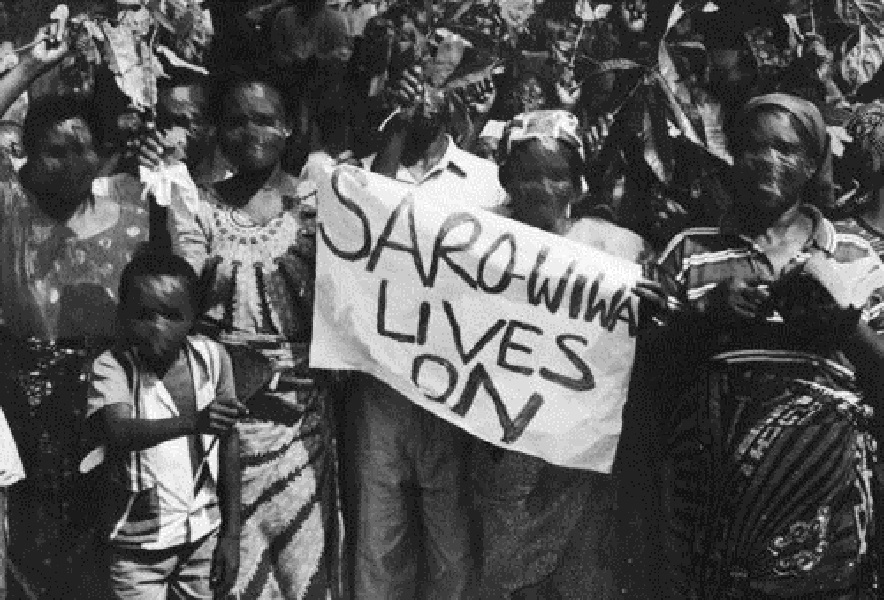 Ken Saro–Wiwa means many things to different people. But without any ambiguity, Ken is a brand and a masterpiece. Even in death, his ideas continues to propel many, including myself, into standing for civil rights and the truth.

Outside Hon T.N Paul Birabi, the widely and generally acclaimed father of modern Ogoni, an exceptional gentleman whose ideas and works shaped today’s Ogoni, Ken Saro–Wiwa is undoubtedly one of the most outstanding personality to emerge out of Ogoni. He formed the Movement for the Survival of the Ogoni People (MOSOP) which became the vehicle for the actualization of his dreams for the Ogoni people and many oppressed nationalities in the Niger Delta and Africa at large.

Our dear Ken Saro-Wiwa’s life was cut short on November 10, 1995. Sani Abacha, the brutish Nigerian head of state had ordered his execution for seeking to actualize the desires of the Ogoni people for freedom in Nigeria. Saro-Wiwa’s campaign had morally affected the Nigerian state and exposed the obscenity Nigeria had kept away from the rest of the world for a very long time.

The Movement for the Survival of the Ogoni People (MOSOP) calls for the decriminalization of Ken Saro-Wiwa and the eight other Ogonis whose lives were cut short by Nigeria’s military dictatorship on November 10, 1995. Shying away from addressing this injustice will only prolong a resolution of the entire Ogoni problem for as a people, we cannot truly celebrate any victory for Ogoni leaving Saro–Wiwa and the other eight in chains. Any victory for Ogoni must come with a smile from Ken Saro-Wiwa and the others even in death.

Ken Saro-Wiwa stood for what is right. They sought a better life and a secured future for the Ogoni people and that could only be achieved by confronting Shell and the Nigerian dictatorship, our tormentors. Shell and the Nigerian Government in a sleek alliance had destroyed the Ogoni environment, taken away the rights of the indigenous peoples of Ogoni, through discriminatory laws, their land and resources have also been taken away and they have been subjected to conditions that do not guarantee any future for the people.

One major fact about Ken Saro-Wiwa’s murder which continues to hunt the Nigerian State is his established innocence. It was the reason former British Prime Minister, John Major called his hanging a judicial murder, former Nigerian minister for foreign affairs, Prof. Bolaji Akinyemi called it state murder  A fact finding team set up by the United Nations Secretary General had also established that his conviction was decided even before his trial commenced..

The Nigerian government today helplessly acknowledges Ken Saro-Wiwa’s heroic deeds.. They honor him, celebrate him in official documentation, they name streets after him, they name a Polytechnic after him and would wish our students and children emulate him. But they simply cannot admit that they murdered him in his innocence.

On Ken Saro–Wiwa, our country stinks in shame, in the guilt of having taken the life of an innocent man so crudely and unfairly. But our administrators at the time cared not and as Ken himself would say, the leaders today are still not courageous to wash the dirt off their linen. And so they are perpetually reeked in the stench of their injustice against the Ogoni people.

As a country, the blood of Ken Saro-Wiwa hangs on our neck and questions our claims to civilization It dents our credibility and in our efforts to erase our bad records, we commit even more injustice, brutalize those who seek peace and deepen the deplorable conditions of our people.

Ken Saro–Wiwa’s blood is permanent stain on Nigeria and her claims to modern civilization. Ken Saro-Wiwa’s blood symbolizes the freedom sought by all oppressed Nigerians today. A freedom to determine for themselves their future and to live a life full of opportunities where no one is discriminated against but everyone can get the best in a free, fair and competitive environment.

Ken Saro-Wiwa’s blood is the stone that prevents the flow of crude oil from Ogoni today for if Ken were to be here, his words would have been enough to resolve the entire Ogoni problem of oil resumption. Ken Saro-Wiwa’s murder makes every attempt to force oil resumption in Ogoni a deep cut on our conscience and exposes our society’s naivety to issues of fundamental human rights given the fact that we, the Ogoni people have not been treated fairly in Nigeria. Attempts to force oil resumption in Ogoni against the people’s conscience questions our humanity. It actually reveals our cruelty and exposes our callousness as a nation. It reveals how much we pay lip service to the things that affect our people rather than seek peace and development through a just system that protects the interests of all.

While the resources of the Ogoni people are plundered and taken away by government and her corrupt administrators, Ogoni is left without any hope of survival. It is the reason why we still call on the government and all men of conscience to seek a peaceful resolution of the Ogoni problem rather than current attempts to force oil resumption through brutal force of the military.

Promoting the idea of forcing oil resumption in Ogoni without seeking to address the Ogoni questions and demands for self determination is to fill our stomach with the blood of our Ogoni martyrs. It is a further attempt to crush and kill the Ogoni people for I know the people will certainly come out in peaceful resistance which will lead to more killings by government forces.

We need no further bloodshed in Ogoni and it is reason we call for a halt in the dubious push for forceful oil resumption, using the military, without the people’s consent.

As we remember the Ogoni martyrs murdered by the Nigerian state on November 10, 1995, we must also resolve not to let their deaths be in vain. We must avoid filling our hunger with their blood by completely rejecting oil resumption without proper negotiations.

The Ogoni problem must be resolved with a big bang of the freedom our fore-bearers sought.

That freedom which lies in the blood of Ken Saro-Wiwa, Saturday Dobee, Nordu Eawo, Daniel Gbooko, Paul Levera, Felix Nuate, Baribor Bera, Barinem Kiobel, John Kpuine, Albert Badey, Edward Kobani, Theo Orage, Sam Orage and over 4,000 others whose lives have been lost in the fight for freedom should be actualized expeditiously.

It should commence with the exoneration of the Ogoni 9 and complemented with the implementation of the model provided by MOSOP in the Ogoni Bill of Rights.

May your souls never rest until freedom is achieved for your people.