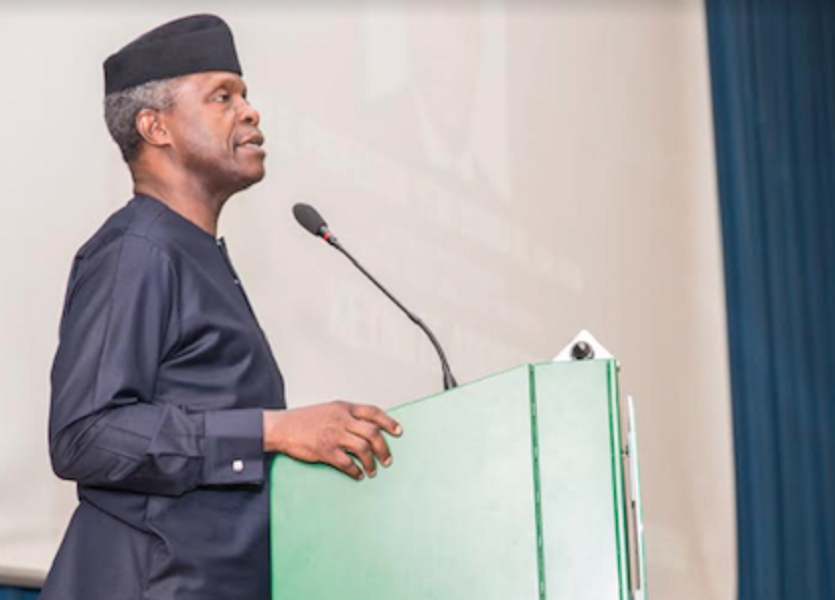 Osinbajo who spoke during the opening ceremony of a two-day Stakeholders Sumit on Free and Compulsory  Basic and Secondary Education organized by Kano state government stated that Ganduje is triggering Educational Revolution not only in the northern region but in the entire country.

According to him, “Kano is eminently positioning to trigger educational revolution around the northern region and Nigeria in general and the Federal Government must steam the tide to make it workable.”

He said the administration of Muhammadu Buhari has made heavy commitment to invest in human capital that is why any support to educational development is being viewed with all seriousness.

He pointed out that Buhari’s administration is continuously working in tandem with state governments to equip primary and secondary schools across the country with needed infrastructures so as to provide conducive environment for learning.

In his speech, Ganduje said the objective of the summit was to discuss, analyze, and generate ideas towards the implementation of the vision for free and compulsory basic and secondary education in the state.

Ganduje recalled that, “on the assumption of office for second term on the 29th of May, 2019, we made a policy statement and commitment to provide free and compulsory education from primary up to senior secondary level. This is in recognition of the pivotal role of education as the primary agent of change in our society.

” It is disturbing to note from available statistics that Nigeria has over 10.5 million out-of-school children, it is also more alarming to note that 60 per cent of that figure represent the girl-child.

“However, a recent survey revealed that most of these children are Almajiris from other northern states and children from the Republic of Niger, Chad and northern part of Cameron.”

Ganduje further called for regional coordination and legislation that will enable the control of the influx of Almajiris from neighbouring countries and also from state to state.

He added to tackle the challenge, “this government has set up a committee to conduct a census of all out-of-school children with a view to update the available data and ensure adequate planning in preparation for the implementation of this all important education policy.

” This will further consolidate the commitment of government to the ‘Better Education Service Delivery for All (BESDA), a UNICEF programme which aims at ensuring equitable access to basic education for out-of-school children. “

Ganduje also revealed that plans are on the way to streamline about 13, 619 Ouaranic schools with 2.5 million pupils across the state and integrate them into the free and compulsory education programme, adding that already, government has set up Quaranic and Islamiyyah Schools Management Board.

He further stated that in line with the free and compulsory basic and secondary school education, his administration has commenced direct funding of primary and secondary schools numbering 1180 with a total students population of 834, 366 at a total cost of about N200 million per month or N2.4 billion per annum.

He added that, “similarly, government has provided school uniforms to 779, 522 newly enrolled pupils (boys and girls) at the total cost of N381 million. In a bid to reduce teaching deficiency in the sector, government is in the process of engaging 3000 volunteer teachers to teach in the various public and Quaranic schools across the state.