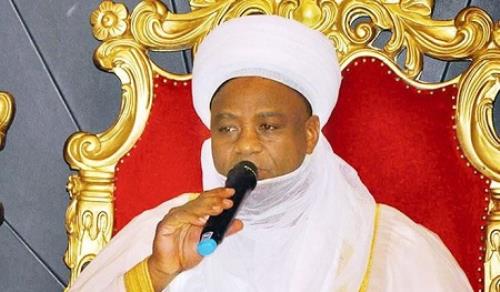 There are strong indications that the Sultan of Sokoto Muhammad Sa’ad Abubakar is frantically working for Governor Aminu Waziri Tambuwal to influence the outcome of the Governorship, National and State Houses of Assembly Election Petitions Tribunal in Sokoto State.

Investigations have shown that the Sokoto monarch is leveraging on his wide and strong connections with senior serving and retired judges to determine where the judgement pendulum of the tribunal swings to.

These frantic and desperate efforts are coming after the tribunal adopted the  final addresses in the petition filed by Ahmed Aliyu of the All Progressives Congress (APC), challenging the declaration of Governor Tambuwal as the winner of the governorship election last Tuesday.

Aliyu had gone to the tribunal seeking to upturn the victory of Tambuwal of the Peoples Democratic Party (PDP) in the 2019 governorship election.

Since the last sitting was held on September 3, Governor Tambuwal has been thrown off guard and has been desperately looking for a way to avert the unstoppable.

Investigations revealed that the governor has been at the palace of the Sultan Abubakar to explore ways of influencing the outcome of the tribunal’s judgement.

Inside sources in the Sultan palace have confirmed seeing the governor at the palace to consider what strings to pull to favor the PDP.

They hinted that on Wednesday, for instance, Tambuwal was at the Sultan palace for a secret meeting that started around 8pm and lasted up to midnight. The marathon meeting was principally aimed at strategizing on how to arrest any judgement that will not favour the ruling PDP in the state.

The Sultan, according to one of the sources privy to the meeting, is said to be using the influence of a retired Federal High Court judge and traditional ruler in neighboring  Zamfara state, retired Justice Lawal Gummi to reach out to certain key contacts so as to tinker with the tribunal’s judgment and truncate justice.

The Sokoto monarch has carved a niche for himself in brokering controversial deals between governors with questionable mandates and judges across the country.

There are fears that the Sultan is using the reverence of the Sultanate Council to achieve these feats in coercing judges to do his unhealthy biddings.

It was reliably gathered that the Sultan was instrumental to the recent election tribunal victories of Governor Nyesom Wike of Rivers State, and that of his counterpart in Enugu state, Ifeanyi Ugwuanyi. All these deals were facilitated by the Sokoto monarch for pecuniary gains.

Apart from the former judge from Zamfara state, another key ally of the Sokoto monarch who is facilitating contacts with the tribunal judges, according to findings, is a former judge of the Court of Appeal, who was forced to resign from office because of corruption allegations.

It was based on the above revelations that we, League of concerned democrats in Sokoto state, are worried on the role being played by the Sultan in sabotaging due process and rule of law. There is no gainsaying the fact that the Sultan is dragging the good name and reputation of the Sultanate to infamy and ridicule.

It is, therefore, clear that what the Sultan is trying to do in Sokoto is a travesty of justice and direct onslaught on the great people of the state. We are hereby saying that tempering with the outcome of the tribunal is a sacrilege and devilish act that must be rejected by all lovers of peace, ruler of law and democracy.