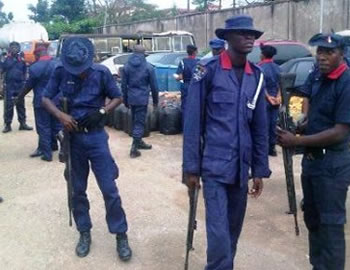 The Command’s Public Relations Officer, ASC Orndiir Terzungwe, made the disclosure in a news briefing on behalf of the Commandant, Mr Babangida Dustima.

He said the four criminal suspects were arrested in connection with conspiracy, vandalism and theft in a Farm Centre on Kaduna-Abuja expressway .

“The four suspects criminally conspired, broke into and vandalised a store container at a Farm Centre, SCC, Jere belonging to Replenish Farm and the incidents were reported by the store keeper and supervisor.

He disclosed that the items carted away by the suspects include: 40 bags of NPK  fertilizer, 132 litres of Atrazine chemicals, 108 litres of striker and nine sachets of caterpillar force.

The Corps PRO also disclosed that the exhibits recovered from the suspects included Hacksaw, Padlock, three mobile telephones and empty cartons of Atrazine and caterpillar force.

He said that after investigation the suspects would be charged to court for prosecution.

He appealed to Kaduna citizens to continue to cooperate with the security agencies and always give useful information for proactive measure.