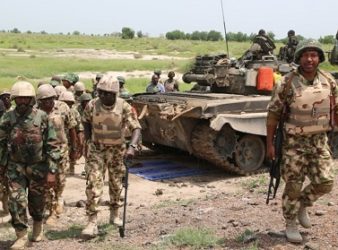 The Operation Whirl Stroke (OPWS), says it has destroyed 38 militia camps and recovered 178 assorted weapons in its one year of operation.

Its Force Commander, Maj. Gen. Adeyemi Yekini, in a briefing on Monday in Makurdi to mark the outfit’s one year aniverssary, said that it also recovered ammunitions of different calibres from bandits.

The News Agency of Nigeria (NAN), reports that OPWS, which covers Benue, Taraba and Nasarawa States, was launched in May 2018 with a mandate to “put an end to the mass killings and destroy all armed militia camps in the states.”

NAN further reports that the troops were also tasked to flush out armed militia gangs terrorising parts of Benue and Taraba states.

According to him, 171 militia elements, including armed herdsmen and criminals linked to terrorist groups, as well as 140 bandits were neutralised during encounters with OPWS troops in the three States.

The Commander further disclosed that 47 AK47 guns, two SMGs, one G2, and 127 locally made guns that make use of the same AK47 ammunitions were recovered during the year.

He said that OPWS was on track in fulfilling its mandate, and commended the Federal Government and governors of the three states for their tremendous support.

“When one looks at the security situation today, compared to one year ago when we started, one can say with every sense of modesty that OPWS has largely achieved its mandate as incidents of mass killings or invasion of villages and communities have been substantially curbed.

“Admittedly, there are still isolated cases of criminality, especially kidnapping of locals by criminal elements, this ugly situation is already being addressed in collaboration with other security forces on ground,” he said.