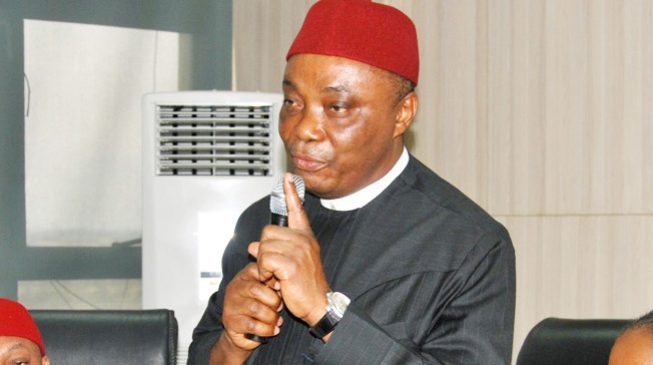 Justice C.J. Aneke of the Federal High Court, sitting in Ikoyi, Lagos on Monday, May 6, 2019 adjourned to May 28, 2019 further hearing in the trial of Senator Peter Nwaoboshi, representing Delta North, Delta State.

Nwaoboshi was re-arraigned on Friday, October 5, 2018, alongside two companies, Golden Touch Construction Project Limited and Suinming Electrical Limited, on a two-count charge bordering on conspiracy and money laundering to the tune of N322million.

One of the charges reads: “That you, Peter Nwaoboshi and Golden  Touch Construction Projects Limited, between May and June, 2014, within the jurisdiction of this honourable court, did acquire a property described as Guinea House, Marina Road,  Apapa,  Lagos,  for the sum of N805million, when you reasonably ought to have known that the sum of N322 million out of the purchase price transferred to the vendors by order of Suinming Electricals Limited formed part of the proceeds of an unlawful activity of fraud and you thereby committed an offence contrary to Section 15(2) (d) of the Money Laundering Prohibition Act  of 2011(as amended) and punishable under Section (15)(3) of the same Act.”

At the resumed hearing today, the prosecution counsel, Wale Ogunde, SAN, informed the court that he received a notice from the defence counsel on March 26, 2019 that it would not be convenient for the first defendant to be present in court during the proceedings scheduled for May 6, 2019 (today) and May 7, 2019 (tomorrow).

“In view of this notice, I told my witness, who works in a bank, that the case would not go on today. I also assured him that I would convey the next adjourned date to him.

Consequently, Justice Aneke adjourned the case to May 28 and 29, 2019 for continuation of trial and ruling.