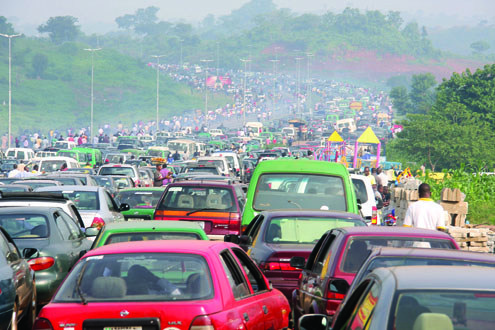 Motorists plying the Keffi-Abuja highway into the city centre had a hectic time on Friday as troops took positions at different areas of the road, conducting checks.

The troops deployed in Mararaba junction and Check point, boundary between FCT and Nasarawa state, as well as Nyanya, Kugbo and AyA overhead bridge subjected the motorists to check.

The check at the rush hour prompted huge traffic build up, forcing many workers in the FCT, who reside in Masaka, Mararaba, Karu and Jikwoyi areas to report late for work.

Motorists had a similar experience on Wednesday as troops barricaded the highway to restrict vehicular movement when President Muhammadu Buhari took the oath of office for a second term at the Eagle Square.

The Nigerian Army did not offer any reason for the troops’ action.

All efforts to get the army spokesman to comment on the situation did not yield any result.

He neither take call to his line nor respond to text message sent to him at the time of filing this report.