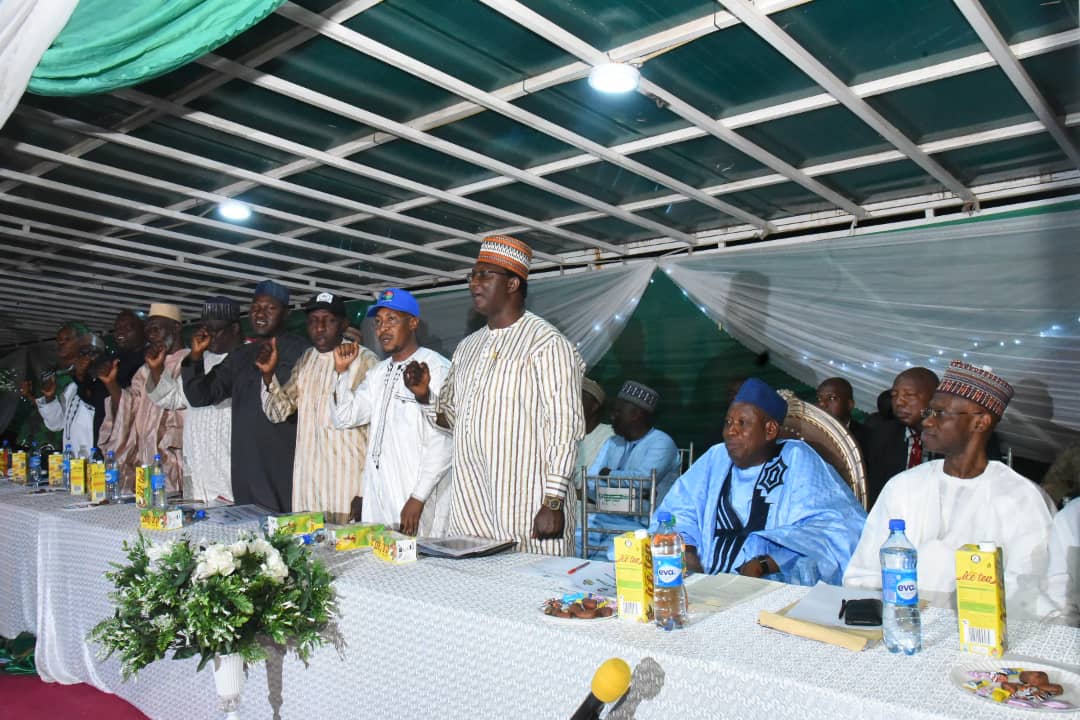 …Union introduces subsidised transport system as appreciation for Kano
Impressed by the cordial relationship that exists between Kano state government and the labour unions in the state, the National President of the Nigerian Labour Congress (NLC) Comrade Ayuba Wabbah, endorses and commends the state as a pacesetter, in the overall welfare of workers.
“We are in Kano to also respect and encourage the good working relationship between us. Governor Abdullahi Umar Ganduje, is,  by all standard, leading a government that is worker-friendly and citizen-friendly that has people at heart,” Comrade Wabbah stated.
He made the commendation, at the Open Theatre, Government House, Kano, Saturday night, during the launching of  a documentary film, depicting employer-employee relationship, in an organised setting, titled “Hakki” (Rights).
Wabbah continued that, the NLC was aware that Kano government under Ganduje makes the welfare of workers as one of the cardinal principles of the administration, stressing that, ” We are fully aware how you take the issues of dialogue and fruitful discussions as important avenues in your administration Your Excellency.”
He also commends the governor for accepting the minimum wage increment, right from day one and for taking good care of retirees in the state. In terms of timely pension payments and gratuity.
While explaining that this year’s Workers Day would be celebrated alongside the Centenary celebration of the International Labour Organisation (ILO), Wabbah congratulates and commends Ganduje for always identifying with NLC activities with full and unrelenting support.
To further indicate how appreciative they are, the union was, as well as their resolve to quench the problem of transport for workers in the state, NLC President reveals that preparations were in top gear to introduce to Kano, Labour transport system.
The transport system, according to him “Is only second to Lagos state, where brand new buses, from the People’s Republic of China, will be in Kano to ease hardship workers face in transportation. It is going to be at subsidised fare. This will further boost the morale of our workers in the state.”
Comrade Wabbah assured the state governor that workers would always and continue to be dedicated to their work. That, according to him, would be another way of appreciating the good working relationship that has been in existence since Ganduje’s coming to power.
NLC President concludes that, “We are happy that the inclusion of our Comrades in your administration, goes a long way in the creation of worker-friendly policies under your watch. You have people like our dear Comrade former President of the Nigeria Union of Journalists (NUJ), Comrade Muhammad Garba. The State Head of Service is also part of this achievement.”
In his response governor Ganduje says “Marriage between employer and employee is an indispensable one. No one can exist without the other. This clearly shows that we have to work together no matter what.”
Ganduje challenges that, under normal temperature and pressure, payment of workers salary shouldn’t be something to celebrate and make noise about.
Emphasising that, “It is nothing more than paying for services rendered with sweat. That is why we really don’t joke with it. We pay as and when due. It is a reward of a work done.”
Celebration of the Workers Day, with a parade, Ganduje said, was not enough for them and workers to appraise relationship. “That was why we introduced an Award Night, where some distinguished workers and employers are identified and we reward them with Awards,” he discloses.
As time passes on he added, “We thought we could add value and feather to it, that is why we now, together with the State NLC, come up with Symposium, as a way of discussing and appraising the relationships. This, we think,  can do a lot in further cementing the relationship.”
After listing some major achievements of his administration in making the working condition more favourable, Ganduje discloses that, workers get protection of their rights also through the State Public Complaints and Anti-Corruption Commission.
On the way of easing transport for workers and all citizens in the state governor said the state government also entered into an agreement with a Chinese company, and very soon 150 buses would flood the streets of Kano for that purpose.
About Twenty Million (N20m) was realised at the occasion for the purchase of the Film. With highest donation from the state government, that gave the sum of Five Million Naira (N5m), while the 44 local governments of the state through the Commissioner for Local Government, Murtala Sule Garo donated the sum of Four Million Four Hundred Thousand Naira (N4.4m).
The Chief Launcher at the event, Engineer  Kabiru Abubakar Kabiru, started with the sum of Two Million Naira (N2m), among others.