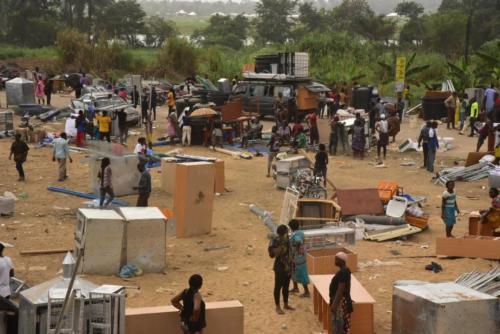 The entrepreneurship starter packs which include welding machines, fridges, generators and technical equipment, which were procured to help beneficiaries become self-employed and independent after under-going training, were carted away in broad day light, as community folks looked on.

According to an eyewitness, Mr. Kennedy Suoye, the looting commenced on the 14th of February 2019 and lasted for three days, while security personnel posted to the area to bring the situation under control did little or nothing and watched the looting go on.

“The center was earmarked for official commissioning by President Muhammadu Buhari during his campaign tour to Bayelsa state. But the President could not make it for the commissioning. Some miscreants took advantage of the situation and broke into the place and started the looting.

“The security personnel stationed at the center watched helplessly as hundreds of people descended on the center to grab whatever they can lay their hands on. Even the window frames of the center were not spared. After doing this, tomorrow they would blame the federal government for not meeting the needs of the Niger-delta people.” Suoye said.

A staff of the Amnesty Program at the center, who wouldn’t want his name mentioned in print, said “as part of the official commissioning of the center, the office was expected to give out Entrepreneurship Starter Packs, to beneficiaries of the Program.

“But things got out of hand as some persons accused the officials of carting away equipment in truck loads from the center in the guise of delivering it to beneficiaries, which eventually led to the breakdown of law and order. And eventually a free for all looting ensued”.