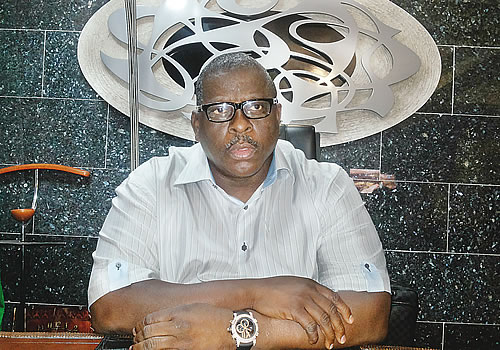 …Insists Adebutu is its Candidate

The Peoples Democratic Party (PDP) has exposed the senator representing
Ogun East,      Senator Kashamu Buruji as a desperate paid agent of
anti-democratic forces working to cause confusion, trigger violence and
bloodletting in the 2019 general election and derail our hard-earned
democracy.

The party says Senator Buruji is an interloper and impostor, who would
soon face prosecution for printing and selling fake PDP nomination forms
to members of the public, in violation of the provisions of the
Electoral Act and the PDP constitution, which vest such powers only on
the party’s National Working Committee.

Senator Buruji would also face the law for conducting phony governorship
primary in Ogun state, with the name and colors of the PDP, an activity
which only the National Working Committee has the powers to conduct and
which it had done after which it submitted the name of our Ogun
governorship candidate, Ladi Adebutu to the Independent National
Electoral Commission (INEC) at the stipulated time.

It is instructive to note that under the Electoral Act and the PDP
constitution, only the National Working Committee, and no other organ of
the party at the national or state level, is empowered to submit a
governorship candidate to INEC.

This function has been duly carried out by the PDP national leadership,
under the Chairmanship of Prince Uche Secondus, upon which strength he
handed Ladi Adebutu, our party’s official flag.

Apparently in the desperation to pacify his paymasters and benefactors,
Senator Buruji, in violation of the law, has been going around, causing
confusion, parading himself as the candidate of our party, even when he
did not stand for our primaries, and threatening our leaders,
particularly, Prince Uche Secondus, with violence, as he even alluded in
his press statement of December 9, 2018, for giving our flag to our
candidate, Ladi Adebutu.

The PDP has received reports from very high quarters that Senator Buruji
has been under pressure from his benefactors at the Buhari Presidency,
who reportedly reached a pact with him to destabilize and distract our
party with a promise to let him off the hook on his pending fraud case,
for which he is risking imminent extradition from Nigeria.

Senator Buruji has lost all electoral value and cannot be a march for
our governorship candidate, in popularity and acceptance by the people,
as darkness has no comparison to the light.

The PDP, therefore, urges all security agencies and Nigerians in general
to note that Senator Buruji is the aggressor and directly hold him
responsible for any breakdown of law and order, since he has given a
hint into such inclination by his violent outbursts and threats.

For us in the PDP, our candidate, Ladi Adebutu, is already coasting to
victory with the people and there is nothing the Buhari Presidency can
do to stop him.