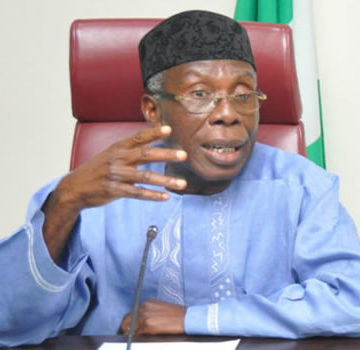 CONTRARY to the reports by the United State Department for Agriculture that Nigeria imported 3 million tons of rice this year, the Minister of Agriculture and Rural Development, Chief Audu Ogbeh has said instead, Nigeria has cut down its rice importation by nearly 90 per cent.

Addressing journalists, Chief Ogbeh said when he saw the report, he met with the CBN Governor to know if he has any letter of credit for rice importation, but the Governor said non was received by the bank.

“We do not import rice, because the duty is so heavy that most Nigerians don’t import rice anymore, after that report, I went to the Central Bank of Nigeria, I met with the Governor and asked how many letters of credit did he open for rice importation this year, he said non.”

Chief Ogbeh faulted the report, saying that some of these reports are wrong and targeted at demoralising Nigerians.

“Some of these reports with all due respect are meant to demoralise our people here, smugglers are smuggling rice, we fight them, we seize them, official importation of rice is as low as it ever was, unless they can tell us which company imported rice, paid the duty at the port, who cleared it, if they don’t, let them give us more details of what they found because, with all due respect, I don’t like some of the comments of some of our foreign friends here, everything we do is wrong, and Nigerians absorb that message.

“If they know who imported, which company, who the clearing agent was if they are talking of smugglers through the port in Cotonou, that’s a different story, even then, am not sure that 3 million tons were imported.

“How do they seat in the US and know everything that happens in our ports, is it credible, I know how many rice mills we have today, what their output is, how much more efforts are going into rice production, we know we have cut down rice importation by nearly 90 per cent, how would they know how much rice is being grown, which one them has ever been in a farm or going to the local rice mills that we have, Kano alone has 1240 rice mills, Kebbi has 3 giant rice mills, then in Jigawa, Ebonyi, Anambra, go to shops and see the label of rice on sale today.

“With all due respect, I want to believe that the mean well but sometimes, there is more mischief than merit in what they say.”

Furthermore, Chief Ogbeh said: “I met with the Governor of CBN, we have to do some subsidy, but subsidies have a problem, we decided that the fund we used to give cheaper credit to them to buy paddy and mill, instead of saying that in every bag you mill, we discount N2000.

How do you monitor how many bags they produce, whoever you post there to supervise is likely to be compromised. And once you begin, at the end of six months you have invested 60 billion naira. We are waiting to start giving them credit, and that will begin literary in another week. Now that rice harvest is beginning and purchases of paddy are being made.

“If we give them this money at five per cent to buy paddy, the difference between the five per cent and the 25 per cent they are borrowing from the bank will impact on the price of rice. The money has been set aside by the CBN, we will work out the modalities and begin with that,” he added.