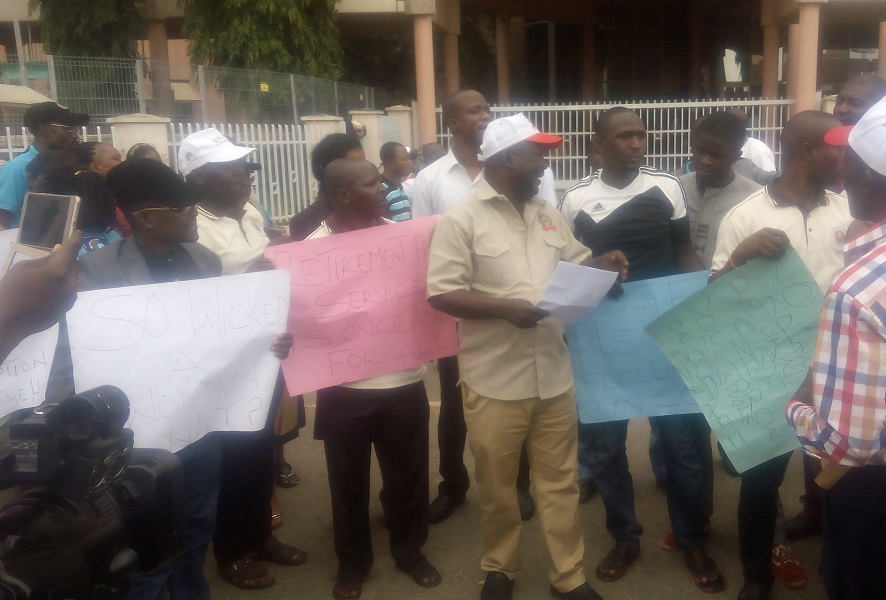 Loading ...
By, Uchechukwu Ugboaja
In the wake of President Buhari’s receipt of the presidential panel report on the alleged corruption cases involving suspended SGF Babachir Lawal and DG NIA Wale Oke from Vice President Yemi Osinbajo, Comrade Onoja Isaac a staff of the Code of Conduct Bureau (CCB) has revealed why corrupt persons may go free as the fight against corruption appears to be ridiculed by on going events in the CCB.

In a peaceful protest organised by CCB staff led by Comrade Onoja at the Federal Secretariat Abuja over an attempt by the SGF office to reinstate a retired civil servant and former Acting Secretary Mrs. Folashade Kolawole, the unionist said that most corruption cases are thrown out of the Code of Conduct Tribunal (CCT) because the right foundation is not laid in the CCB.
According to the union leader, when nepotism becomes the order of the day in an organisation like the CCB that should spearhead the fight against corruption, it makes it appear like a joke to the world.
“If we don’t get it right here that is how we will keep loosing cases in court and we say we are fighting corruption? I can tell you that this is the reason most of the looters are going free in Nigeria because the foundation for fighting corruption is not well laid. This is the reason why corruption cases are thrown out at the the Code of Conduct Tribunal (CCT), and the former Secretary doesn’t care about such things.
“You cannot tell me that the DSS are not aware of the corrupt practices of this woman, they can’t close their eyes to it including all the shady contracts which she is trying to benefit by securing a backyard judgement. Is she not aware that when you leave the service by any means you are no longer guided by the Public Service Rules (PSR) and so if you have any grievances you should approach the Industrial Court and not the SGF, and so by virtue of Section 158 which makes it very clear that once a board takes a decision there is no other authority in the country that can upturn it except a court of competent jurisdiction.
He further went to state that, “We learned that the SGF set up a committee which purportedly claimed to have resolved to reinstate Mrs. Folashade after she duly retired voluntarily. No one forced her to retire when she did and the retirement has been accepted and perfected as well, there is therefore no rule in PSR anywhere that allows for such fraudulent reinstatement after duly retiring from service.
“As a union we are therefore praying the President and every other leader to intervene in this matter before it goes out of hand, because without a functional Code of Conduct Bureau even the EFCC or ICPC cannot properly carry out their functions effectively which includes successful prosecution of corruption cases against public office holders.
“Despite the CCB loosing all these corruption cases what was her reaction? Was there any training or capacity building programme for investigators during her time. The SGF which claim that they are supervising, what did they also do about it? As I speak to you for two years now there have not been any annual increment for anybody working in the Bureau here and when we went to her she did nothing about it, so majority of us were happy that she left at that time not only for her to resurface after 5months with a letter from SGF on her reinstatement as CCB Ag. Sec. we the workers say no to such imposition.”
Documents revealing why she was to be suspended on the 20th of April 2017 by the CCB board chaired by Mr. Sam Baba as well as her Letter of Notice of Voluntary Retirement from Service on the 12th of April 2017 and some of her retirement benefits payment vouchers was made available to our investigative reporter.

We will recall that just like many other vacant boards and parastatals in the country, the new CCB Board is yet to be screened by the Senate which leaves the Ag. Sec. saddled with its leadership under the supervision of the SGF.
“Majority of the staff of CCB can’t work with her anymore because she was so high-handed in her dealings with staff. I can tell you that she had issued queries to some Directors during her short stay as Ag. Sec.
So if anyone in SGF desperately wants Mrs. Folashade Kolawole back from retirement let them post her elsewhere, because we can’t work with her.
Comrade Onoja Isaac further stated that if the SGF needs to worry itself about activities in the CCB, it should think of how to reposition the Bureau to fight corruption, as well as hasten the issue of constituting the Bureau Board as he claims that a lot of things are going wrong in its absence. He described the absence of the board in the running of CCB as a family without a father.
After retiring voluntarily on the 12th of April 2017, Mrs. Folashade Kolawole came back in August 2017 to resume as the Acting Secretary of CCB but it was resisted by the staff union.
According to the protesting workers who carried various placads expressing their dissatisfaction over the attempt by a Perm. Sec. in the SGF office to unilaterally sign a letter reinstating a retired Staff.
Apart from refusing to implement the new SOP which is a gazetted document from the Presidency, she was said to have quickly sent in her letter of voluntary retirement all to avoid being suspended for her actions, the former Ag. Sec. was also accused of high handedness and gross abuse of office.
Her return to office after 5months did not go well with union and staff members as she was booed upon her return and denied access to office. However, some of the staff revealed to our reporter that she swiftly arranged for police to force her way into the office.
The present CCB Ag. Sec. Mr. Agom-Tor Ngusha who was handed over the affairs of the board on the 16th of June, have remained calm in the face of this crisis that have rocked the CCB.
It was also confirmed exclusively to our reporter by a reliable source in the SGF that the purported letter reinstating Mrs. Folashade Kolawole was duly signed by Dr. R. P. Ugo Permanent Secretary General Services SGF despite confirming that the former has began to receive some part of her severance allowance and benefits.
Reacting to all these allegations, Mrs. Folashade Kolawole said that as a civil servant she is not permitted to speak to the Press.