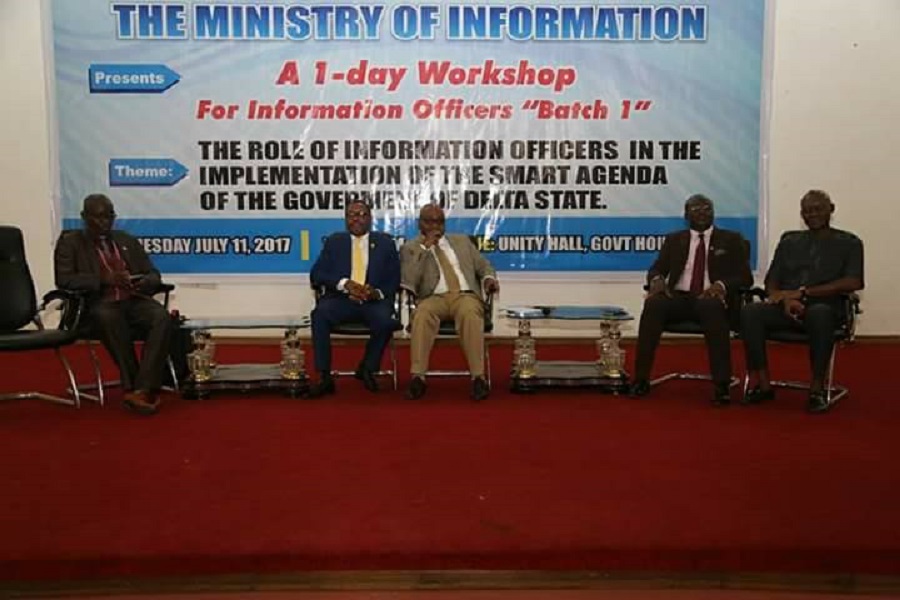 Unpredictable Delta State Commissioner for Information, Patrick Ukah has bombarded information officers in the state for foot dragging for not propagating the ‘SMART Agenda’ which Deltans have described as “Dull Aganda” of the state governor, Ifeanyi Arthur Okowa in the last years.

Fickle Ukah who made enquiry on which of the information officer in any of government agencies and parastatal that have been able to activate their website got infuriated when only six Public Relations Officers (PROs) signified.

“Only six officers in the whole of this hall. You know the job but Laziness, lack of commitment, lack of loyalty, lack of training skills and procrastination is what is holding you down”, unstable Ukah thundered.

The inconsistence commissioner also accused the PROs of maligning their various ministries, describing them as timid, “you are not proud of your ministry, most of you are the ones that runs your ministries down”, threatening to lay the sledge hammer on them, “some of you are getting too comfortable where you are”, the capricious commissioner noted.

Some of the ministries their PROs have not activated their website whom the whimsical Ukah called includes the ministry of Finance, Agriculture and Natural Resources, Secondary and Basic Education among others.

He stated that it was their duty to research and get public opinion and advice chief executives through strategic planning and therefore charged the officers to ensure the implementation of the SMART Agenda by being alive to their statutory responsibilities.

He said the officers were only good at introducing quests during courtesy visits to their bosses and collection of monies for onward disbursement, “you are good at picking the microphone and introducing quests during courtesy visits. If that is what you are good at then forget about it. I have told them at the headquarters to brace up. You can’t even advise your boss, give detail information of what is happening in your ministries. In two whole years, some of you don’t have reports on the newspapers and you want the governor to be happy? He cannot”, he sounded.

He aligned that the reason journalists interpret situation was due to their laziness as they could not fashioned reporters with the needed information when they come calling to clarify certain information about their ministries.

The erratic Commissioner also tongue lashed the Information Officers whom he said were been rejected by their ministries on arrival.

Earlier, the Secretary to the State Government (SSG), Ovie Agas, who declared the event opened told the Information Officers that they play a vital role in good governance as they are image makers, negotiators and facilitators, adding that they also provided feedback to the government on public opinions.

He urged them to take the one day seminar seriously as part of ensuring the success of the SMART Agenda of the present administration in order to serve the state better.

In his opening lecture, the President of the Nigerian Institute of Public Relations, Dr. Rotimi Oladele, informed the officers that public relations practice was a planned and sustained effort to establish and maintain goodwill between an organization and its publics, adding that they were mediators between government and the governed.

He noted that one of the key strategies to ensure success in the practice was to maintain credibility which they must strive to sustain at all times.

Also speaking, the state Head of Service, Mr. Reginald Bayoko, said Information Officers had a central role to play in good governance and therefore urged the participants to understand their duties which according to him included assisting government to monitor publications in the media.

He stressed the need for synergy between the public, stake holders and government in order to enhance performance and thanked the Governor for approving the seminar as part of the human capital development of the state.

While stressing the need for motivation of staff, Sir Ofili noted that information officers should at all times promote the image of the government and advised them to uphold the core value of the service which according to him included impartiality, anonymity, and neutrality.

Some of the Information Officers who spoke with journalists distant themselves from the accusation of their boss, noting that they were not among those rejected by ministries on arrival as noted by Ukah.