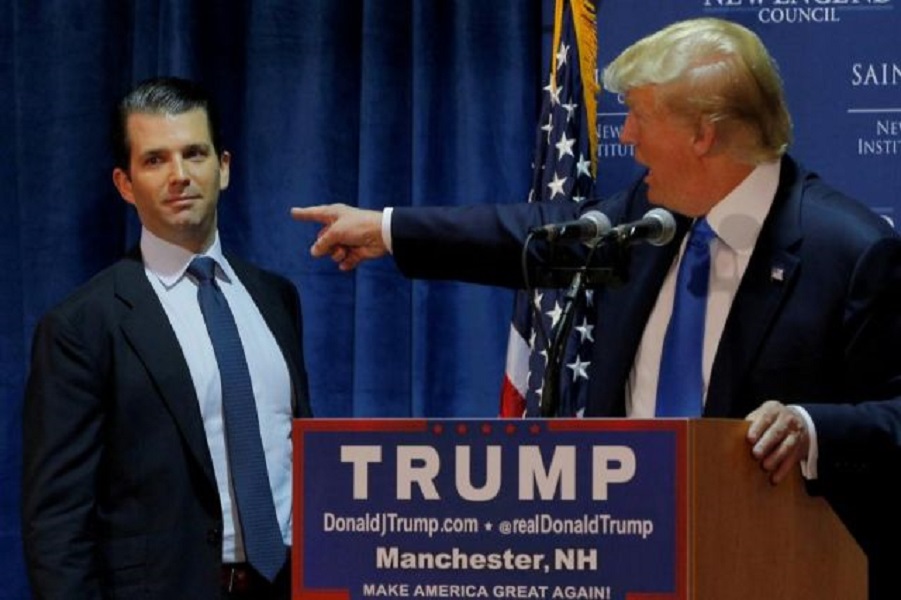 The president’s son Donald Trump Jr. has been made “miserable” by the scandal around his decision to hold a meeting last June with a Russian lawyer he was told represented a Kremlin effort to help his father win the 2016 election.

“Don [Jr.] can’t do any deals because he’ll be overly scrutinized,” a source from the Trump family’s inner circle told People magazine. Donald Trump’s eldest son, they added, “just goes to work every day and is miserable.”

“You can’t bite the hand that feeds you, but he [Don Jr.] can’t wait for these four years to be over,” the source said.

Donald Trump Jr., shown with his father at a New England Council “Politics and Eggs” breakfast in Manchester, New Hampshire, on November 11, 2015, is reportedly “miserable” following the scandal over a meeting with a Russian lawyer during the presidential campaign.

The scandal broke July 8 when The New York Times reported that Donald Trump Jr. held a meeting with a Russian lawyer at Trump Tower on June 9, during the 2016 campaign.

On July 11, Trump Jr. released a series of emails that show he was told that the information the lawyer wanted to give him was meant to harm Hillary Clinton’s campaign. He was also told the information came from the Russian government.

Donald Trump Jr.’s story about what happened in the meeting changed several times before he released the emails. He has subsequently said that anyone would have taken the meeting and that it was merely opposition research.

Former Trump campaign manager Paul Manafort and the president’s son-in-law, Jared Kushner, were also at the meeting, along with a representative of Russian oligarch Aras Agalarov and a former Russian military officer turned lobbyist, Rinat Akhmetshin.

President Trump and the White House have vigorously defended Trump Jr. The president tweeted last week that his son is “innocent.” Under election campaign law, it is illegal for a presidential campaign to receive anything of value from a foreign government to support a candidate.

The Trump campaign is currently under investigation in Congress and by the Justice Department. They are looking at whether the campaign assisted Russia’s efforts to interfere in the election.

Trump Jr. is helping to lead the president’s Trump Organization, alongside his brother Eric, during their father’s absence.

The scandal that has developed from news of the meeting means that Trump Jr. has gotten on his father’s bad side, a source who has done business with Trump told People. “You have to justify your existence to be in his realm,” the source said. President Trump “doesn’t like failure and mistakes, and he doesn’t accept them.”