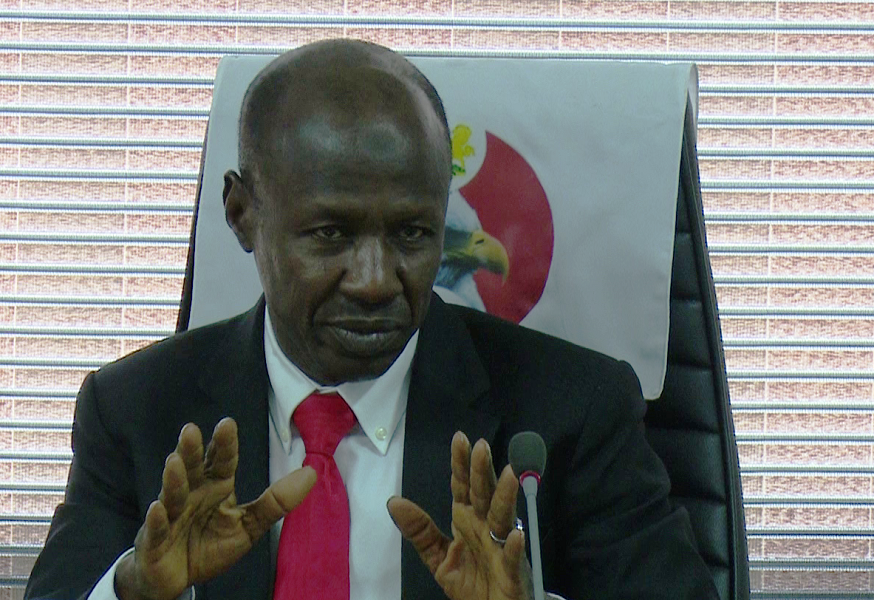 The acting chairman of the Economic and Financial Crimes Commission, EFCC, Ibrahim Magu on July 19, 2017inaugurated a committee to reposition the Nigerian Financial Intelligence Unit, NFIU.
[poll id=”28″]
The committee which has members drawn from law enforcement, financial and regulatory agencies is chaired by Dr. Abdullahi Shehu, a former Director General of the Inter-Governmental Action Against Money Laundering in West Africa, GIABA. Other members of the committee are Mr. Chidi Chukwuka from the Nigeria Deposit Insurance Corporation (NDIC); Mr. Bamanga Bello, Head of the Special Control Unit against Money Laundering (SCUML); Hajia Jamila Yusuf of the Central Bank of Nigeria;  Mr. Udofia Akpan Obot, a former deputy director, CBN , while Mrs Joke Liman of the EFCC is to serve as secretary
Speaking at the inauguration, which is coming on the heels of the recent suspension of the NFIU from membership of the Egmont Group of Financial Intelligence Units, Magu charged the committee to take a holistic look at the mandate and operations of the NFIU with a view to coming up with proposals to reposition the agency for greater efficiency.
While noting that members of the committee are persons with rich experience in Anti Money Laundering and Combating Financing of Terrorism, Magu reminded them that membership of the Egmont Group was critical to Nigeria’s effort to tackle money laundering, and monitoring of financial flows within and outside the country.
He charged the Committee to among others, address the concern of the Egmont Group, by providing the necessary frameworks needed “to coordinate the effective process of amendment of section 1(2)(c) of the EFCC Act to expressly reflect NFIU as an autonomous unit under EFCC so as to provide legal basis or clarity on its operational independence from the EFCC.
“Make recommendations with respect to the funding of the NFIU’s operations.
“Develop career path for the staff of the NFIU.
“Develop protocol for the protection of information and confidentiality, specifically as regards the status of STR information and information deriving from international exchange.
“Develop procedure for the processing of information held by the NFIU either deriving from STR or from international exchange for legitimate purposes”.
Responding on behalf of the members of the Committee, Dr Shehu expressed delight at the opportunity given to them to serve the country. “We see this as a call to service and we assure you that we will ensure that we carry out this task judiciously in order to reposition the NFIU, and ensure that it is autonomous as this will further strengthen the anti-corruption fight”, he said.
He assured that the committee will hit the ground running as members are familiar with the issues in the anti money laundering architecture in Nigeria. Reflecting on the nation’s efforts to tackle Money Laundering, Shehu said the world has really not given the country credit for its pioneering efforts in tackling money laundering in the African continent. He disclosed that Nigeria was the first country to enact an anti- money laundering law in Africa and also the first to set up a Financial Intelligence Unit, an agency that has mentored other FIUs in the West Africa sub-region.
He further commended Nigeria’s role in setting up and nurturing GIABA to global reckoning. Shehu however acknowledged that there were challenges in the country’s ant- money laundering framework which must be tackled for the country to fully achieve the objective of fighting corruption and money laundering.
The Committee has one month to submit its report.