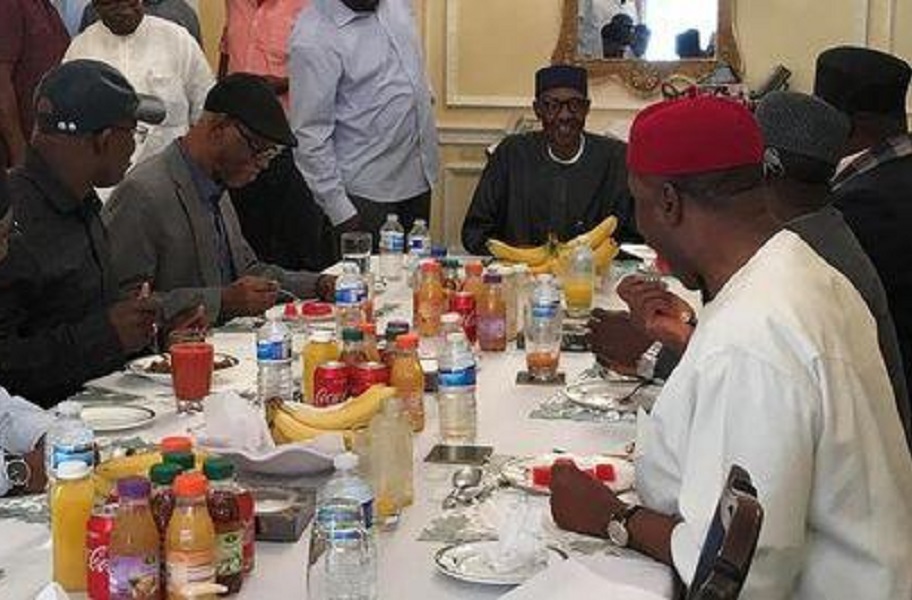 ABUJA (Reuters) – Nigeria released a photograph of President Muhammadu Buhari on Sunday, the first in almost three months after he left the country on May 7 for medical leave in Britain.

In stark contrast to his first absence, when numerous photos of a notably skeletal leader were published, the presidency had released no images of Buhari during his current medical leave until now. That sparked speculation ranging from his ability to contest the 2019 election for a second term to his death.

The president is on his second medical leave so far this year, the majority of which he has spent being treated for an undisclosed ailment in London.

The picture purports to show Buhari dining in Britain with senior members of his political party on Sunday, according to an accompanying statement from the presidency.

Reuters was unable to verify the authenticity of the photograph.

“The party delegation spent more than an hour with President Buhari over lunch,” said Sunday’s presidency statement, adding that “President Buhari will be back as soon as the doctors give him the green light.”

The refusal of officials to disclose details of Buhari’s illness has triggered fierce speculation in Nigerian media and on social media over the past few months about his ailment and whether he will seek a second term in the 2019 election.

Details of the 74-year-old president’s condition have not been disclosed. Buhari left the capital, Abuja, in May and handed over power to his deputy, Yemi Osinbajo, seeking to allay concerns of a void at the helm of Africa’s biggest economy.

A thin-looking Buhari was last seen in Nigeria on state television welcoming a group of 82 girls released by Islamist militant group Boko Haram, just hours before he flew to Britain to begin his medical leave.

Buhari reduced his working day to a few hours each day after returning to Nigeria from his first stint of medical leave on March 10, diplomats and government sources said.

He was not seen outside of the presidential villa in Abuja before leaving again on May 7.