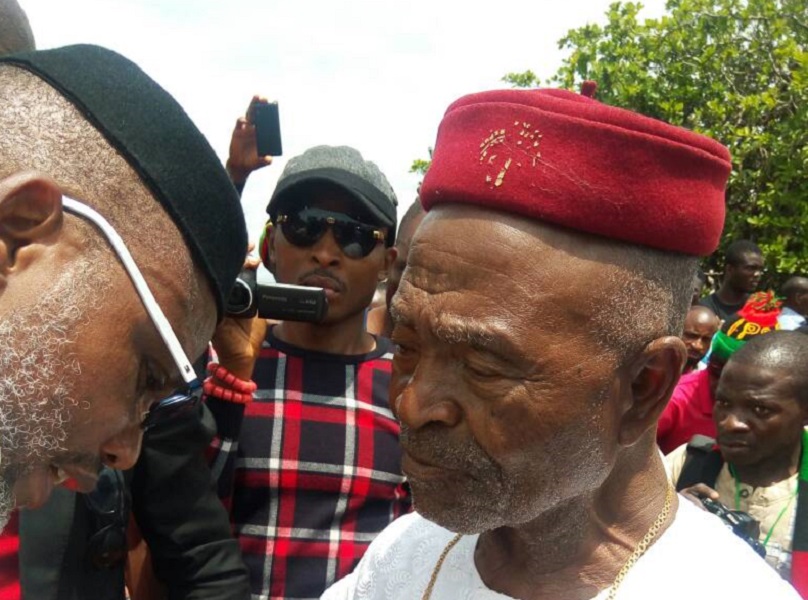 We the indigenous people of Biafra (IPOB) and it’s leadership worldwide under the command and leadership of Mazi Nnamdi Kanu wish to put the whole world on notice over the constant threats to life from clueless vampires, individuals and groups in Nigeria on IPOB leader Mazi Nnamdi Kanu and other members of IPOB since over one month now.

We are very much perturbed over the constant threats to life of our leader Mazi Nnamdi Kanu from some retired and serving killers in Nigeria security operatives like the Former Chief Security officer to Abacha Major Hamza Al Mustapha, Alhaji Ibrahim Kpotun Idris IGP, Army Chief of Staff Major General Tukur Buratai, Former President of Nigeria Chief Olusegun Obasanjo, former Police commissioner Lagos State Alhaji Abubakar Tsav, Yerima Shetima and others who are seriously on mission this time around to eliminate our leader Mazi Nnamdi Kanu and other principal officers of IPOB worldwide.

More so, we are not unaware of the assassination plots going on among our people with FG officials, Ohaneze Ndi Igbo led by Chief Nnia Nwodo, Gov. Willie Obiano of Anambra State, Gov, Rochas Okorocha of Imo State, Gov. David Nwaze Umahi of Ebonyi State, Methodist Prelate Samuel Uche and others who are in forefront to eliminate the IPOB leader Mazi Nnamdi Kanu because of his believe and determination in liberating his people and Christians in Nigeria who have been subjected to inhuman treatments since 1966 till date.

We understand that Federal Government of Nigeria mapped out huge amount of money and political positions for the position lookers to carry out the heinous crime against someone whom God Almighty (Chukwu Okike Abiama) have ordained to liberate his people and Christians in Nigeria and they are also looking for ways and someone who can destroy IPOB worldwide from outside and inside or to assassinate IPOB leader Mazi Nnamdi Kanu but we promise them that  any attack on Nnamdi Kanu or assassination attempt will radicalize the struggle for Biafra independence to the point which no one can curtail the radicalism for Biafra independence anymore because the attack cannot stop or quench the quest for Biafra freedom.

A lot of people have been massacred in cold blood and others laid down their lives for Biafra freedom between 1967 and 1970 and during our peaceful protests and rallies in Biafra land while the Nigeria state and all these political errand boys and contractors did nothing to stop or condemned it with its entirety rather they are looking for ways to bring IPOB into Nigeria politics but we said no to that.

IPOB members and it’s leadership worldwide cannot stop half way because the struggle for Biafra quest for freedom is at the point of no return therefore Government of Nigeria should fix for a referendum where people will decide through their votes but if the masses of Biafra decide otherwise then Biafra quest can be put to stop but for now IPOB have passed the rubicon, no going back.

We still maintain our stand that we are not asking for war or any confrontation with any person, group or Nigeria state rather than we challenge the Federal Government of Nigeria and their masters British Government to fix a date to conduct a referendum in all the Biafra territory for the masses to determine where they want to belong instead of forcing people to stay together in this cage called Nigeria. If Nigeria feel that they are on ground let them fix a date for referendum for Biafra independence, we challenge them because intimidation, killing cannot stop IPOB members worldwide.

It is unfortunate that some Nigerians who claimed to be educated enough in Nigeria of today cannot define the meaning of war, referendum and self determination with the approach for peaceful moves within the ambit of United Nations law ratified in African charter which Nigeria is a signatory to. Honestly, it is appalling and painful to English Language and Dictionary that only in Nigeria where people regard calls for referendum as a call for war while in other civilized world it is a good way of resolving a burning issues like fight for freedom and self determination and other domestic issues.

However, we are putting all the world leaders, Amnesty International, Human Right Watch, relevant Human Rights organizations, people of good conscience around the world on notice to prevail on Nigeria Government and her Hausa Fulani dominated security outfits to stop their evil plots against our leader Mazi Nnamdi Kanu and IPOB members worldwide.

Therefore, we are reminding those evil plotters that if anything happen to our leader Mazi Nnamdi Kanu who have been using nonviolent methods for Biafra liberation since the inception of IPOB that they will experience what they have seen before since the creation of the contraption called Nigeria by British. Since the inception he has not kill any fly talk of human being, we once again warn them to desist from their plans because it will not yield them good rather it will be devastated to mankind living in this sub region.