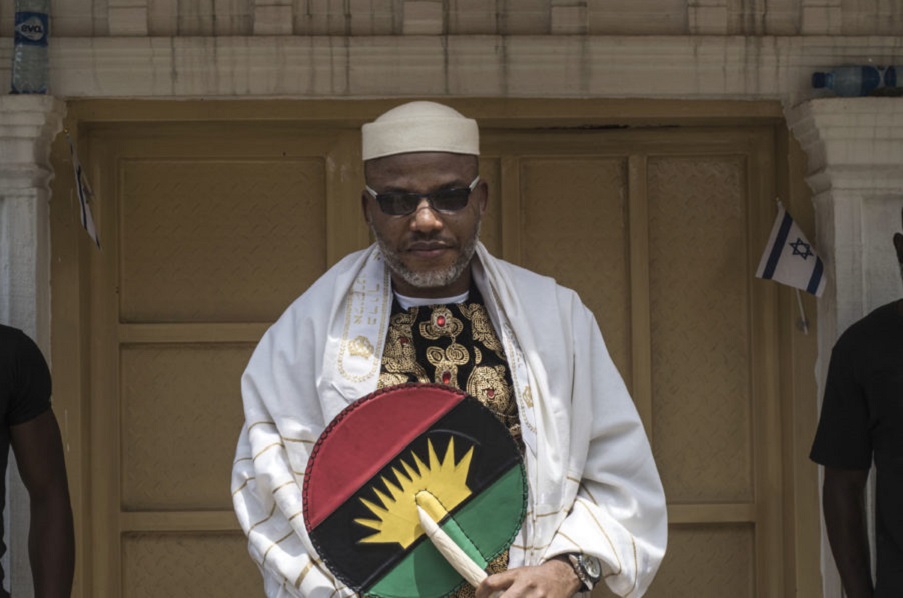 Information reaching 247ureports.com from the Secretary of the Indigenous Peoples Of Biafra [IPOB], Emma Powerful indicates that the Nigerian Military may be planning to invade the home of the leader of IPOB, Nnamdi Kanu.

According to a press statement released earlier today by the IPOB Secretary, the Nigerian soldiers have arrived Enugu in seventy [70] military trucks loaded with arms and soldiers to attack IPOB members and Biafrans in their respective homes.

The statement reads, “Nigeria soldiers dominated by Hausa Fulani have arrived Enugu with 70 military trucks loaded with arms and army to attack our people in their respective homes where we are having sober reflection on our people killed during the genocidal war against Biafrans in 1967 thru 1970”.

The Secretary called for caution and alertness among Biafrans and members of IPOB. Emma Powerful also beckoned on all participants to begin heading to the home of the IPOB leader at Umuahia to avert what the Secretary believes would be a bloody invasion by the Nigerian Army. “All Biafrans must be at alert to start heading to Umuahia the home town of our leader Mazi Nnamdi Kanu at short notice. Hausa Fulani soldiers are spoiling for war in a serious bid to eliminate our leader Mazi Nnamdi Kanu”.

He continues “The Hausa Fulani dominated soldiers and police are planning invasion of Umuahia the home town of our leader Mazi Nnamdi Kanu as they did in the home town of Zakzaky. The military helicopters hovering around the town of Umuahia are disturbing the community right now”.

Already there are indications that the DSS has launched an operation to forcefully indict the members of IPOB. According to the Secretary, “our intelligence sources have it that the DSS have arranged for hundreds of youths to wear with Tee-shirts bearing the IPOB name. The youth would then parade the streets to cause confusion. This would then result to IPOB being blamed for causing problems in the town”.

The Secretary made it clear that the Soldiers want to kill IPOB members. “The soldiers have perfected this arrangement to kill our people, therefore we are calling Biafran to stay indoors otherwise the army will kill you”.

It is recalled that over 380 defenseless and unarmed IPOB members were gun down by the Nigerian military in the various cities of the South East for the offense of holding a peaceful rally against the illegal detention of the IPOB leader, Nnamdi Kanu. Many more unarmed IPOB members were killed by Nigerian soldiers as their celebrated the victory of Donald Trump as the president of United State of Anambra. Some of IPOB members numbering a little over 200 who were engaged in a prayer session inside a gated church compound in Anambra State were killed by Nigeria military.

Tomorrow, for the anniversary of Biafra declaration, the leadership of IPOB had called for a stay at home for all peoples of the former Biafra region. The Inspector General Of Police in response called the stay at work declaration illegal and condemned it. He threatened to throw the law at any participants of the stay at home order.