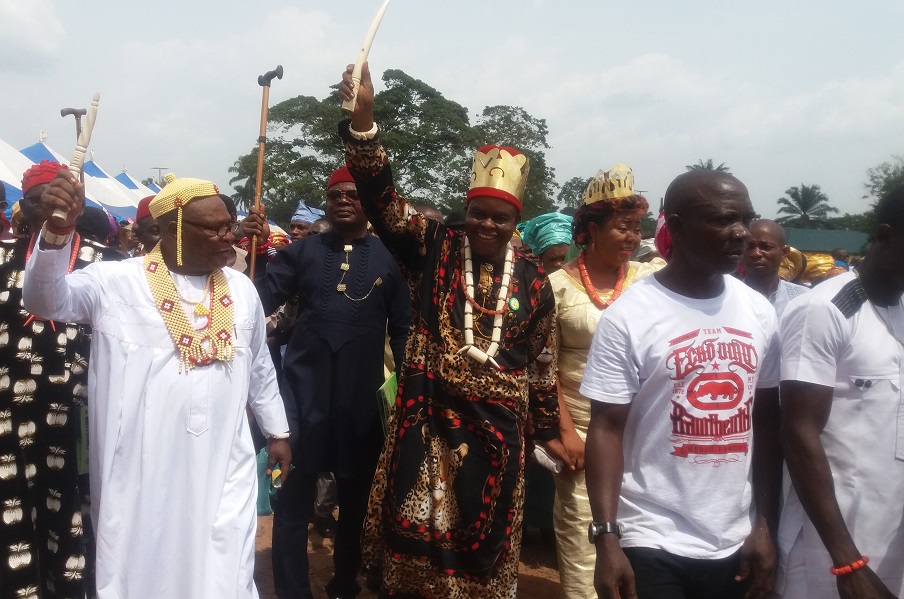 The newly coronated traditional ruler of Mgbala Agwa Autonomous Community, HRH Eze Blaise O. Uba, has responded to newspaper publication sponsored by one Eugene Oharama, saying that he misinformed the general public on the issues.

According to the Eze who spoke to the press in his palace on Friday, the story that a court order stopped him from parading himself as the traditional ruler of Mgabala Agwa Autonomus and that he went ahead to hold the coronation against the order of the court, was false and a product of the imagination of the sponsor of the story.

He added that there was no court order stopping his coronation on Wednesday, April 19, 2017, pointing out that the newspaper publication by Ohamara was an act of mischief and misrepresentation of facts to the general public.

The Eze said he did not hold his coronation against any court order, saying that as a retired police officer he has respect for the laws of the land can never show the slightest disrespect for the judiciary, which he described as the last hope of the people and the soul of the society.

According to the Eze, Ohamara was one of the contestants to the throne who participated to the last process in the selection of the Eze, saying that “As God would have it I emerged the Eze.”

He also said that since his becoming the Eze of the community neither him nor his community had known peace for years, noting that Ohamara had gone to court to challenge his emergence as the Eze.

He said that two of his former contestants to the throne, namely: Chief Attah and 2 others and Nze Damian Osuoha, had approached the court for Motion Ex-Parte and Motion respectively.

Eze Uba said that the court in its ruling on suit number HOG/44/2012 in Motion number HOG/53M/2017 upheld the ruling of a court on August 22, 2013, saying that the parties should maintain statusquo.

The Eze also explained that the court had also struck out the Motion Ex-Parte brought before it by Nze Osuoha, explaining also that “injunctions granted Ex-Parte lasts a few days”.

On the issue of statusquo as upheld by the court, the traditional ruler explained that the state of things before the court action was instituted was after he had become the Eze and not before it, saying that by statusquo he maintains his ezeship. He said there was no mention of his coronation or his parading himself as the Eze of the community, moreso as the Governor has not withdrawn his Staff of Office.

“Eugene is writing all this because the Governor gave me the Staff of Office. He goes about with the title of Eze-Elect when there is existing Eze. He should stop the impersonation”, Eze Uba said.

Eze Uba also explained that the Peace Committee set up by the community had attempted to broker a truce between them both, saying that Eugene had bungled it.

He said that the Peace Committee had invited them to a meeting in a hotel in Owerri for peace talk, saying that during the peace pally Eugene asked that he should be compensated since he had spent a fortune in the contest for the ezeship.

The Eze said that he had agreed to the condition for compensation and had made up his mind to adequately compensate him for the interest of peace in the community, saying that he had also requested that Eugene withdrew his court case as a precondition for the compensation, but he reneged on the agreement once he left the meeting.

Speaking on the allegation of certificate forgery and identity theft, Eze Uba said that “Eugene is allowing his emotion get the better of him”, even as he called on him to retrace his steps.

The Eze said the allegation of certificate forgery was false, saying that the G4 mentioned in the newspaper publication was not a certificate but a testimonial. He explained that no one could present it anywhere in Nigeria as certificate.

“I did not contest the Eze with the G4. It is a testimonial and not a certificate and no one can present it anywhere in the country as a certificate”, Eze Uba explained.

The Eze also said that the matter of the forged certificate had been brought before the DSS and that he was cleared, stressing that certificate forgery is a criminal offence in the country and that there was no way the DSS would have left anyone who had forged one.

“After my First School Leaving Certificate, my father said he was not going to send me to secondary school because he did not have the money to do so. Then I went to stay with my uncle, late Mr. Donatus Echefu Agumadu, who was a staff of SDPC. He promised to send me to school and ensure that I completed my secondary school.

“Then I got admission into Madona High School, Ihitte, doing classes 1 to 4 before the war broke out. I returned home during the war and joined the Biafran Army. But I later wrote my GCE.

“I am a devout Catholic and I have always used my name Damian – which is my confirmation name, Onuoha – which is my native name, Blaise – which is my baptismal name and with which I am more popularly known, and Uba – my surname. All of them are my names.

“I do not know the other person Eugene referred to in his newspaper publication and I am not aware that anyone swore to any affidavit. Moreover, nobody had petitioned me to the Nigeria Police Force and I was never interrogated on this matter since I was in service.”

Eze Uba also disclosed that the detractors had petitioned the DSS claiming that it was his elder brother who had the name, Damian. He explained that his elder brother had presented all his document to the DSS and it was clear to all that his accusers lied.

He assured the people of the Mgbala Agwa Autonomous Community not to panic but to disregard the story as they have always done, since no falsehood could become truth no matter how presented.

He also called on the general public to be wary of the antic of people like Eugene who do not like the peace and unity enjoyed by the people but delights in peddling falsehood and dressing them in the garb of truth.

The Eze also called on his subjects to continue to maintain the peace and unity in the community and shun all acts of criminality.