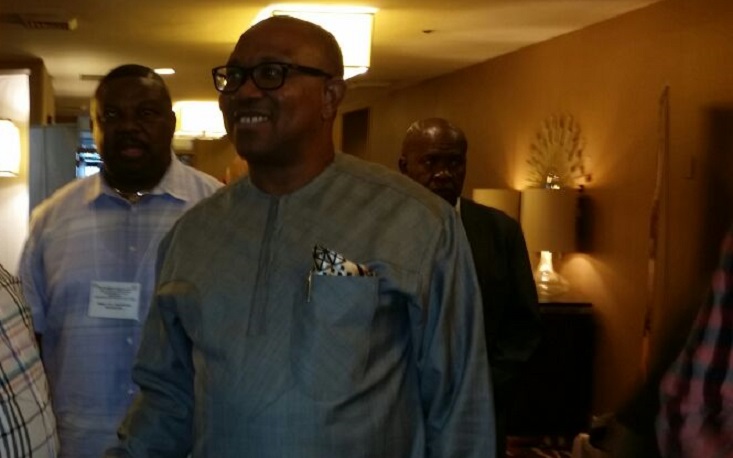 Our party requests the former Governor of Anambra State ,Mr. Peter Obi
to cut his sudden holiday abroad short, and return home to clear
himself of all issues, insinuations and innuendos arising from the
discovery of an equivalent of N15bn in cash denominated in multiple
currencies around his Lagos home.

We are not so concerned here about the angle of contravening the law,
as adequate institutions of state are already doing a thorough job on
the matter. We are only concerned that Obi is fast becoming the
proverbial country man who never steals, but who the theft of a goat
is reported, each time he passes’.
We are mindful that investigation and prosecution are ongoing in
another strong case involving the bribery of INEC officials, for which
Obi has been variously mentioned in cahoots with Dezziani
Alison-Madueke.

We have heard the TALE that the governor sent the keys to the N20m-
per-month rented acccommodation which needed to be searched by the
security agencies and it creates more questions for us than answers,
because searches are normally conducted in the presence of the house
owners.

But more importantly, we do not want to believe that Obi is skeptical
about appearing in person for issues that question his integrity and
acclaimed thrifty life, as that would be a serious error of judgment.

We are not impressed by the rootless propaganda of not furnishing the
particular flat bought by Mr. Peter Obi with Anambra State Government
money, because furnishing pales into insignificance when the capital
value of the flat is concerned.

Those who profess thrift as a lifestyle , while hiding ostentation
should rise to the many questions that have suddenly been thrown up
,particularly in a situation where Obi, a Peoples Democratic Party
(PDP) member, renting a jumbo flat ownd by a another PDP member and
former PDP national Chairman and surrounded by many PDP co-tenants can
no longer say with certainty if Apartment 1A is owned by Mr. Gregory
Peter Onwubuashi Obi or my Mrs Margaret Obi,or both.

The situation as it is, provides Ndi Anambra an opportunity-become
issues with the law- to answers a few questions, including but not
limited to why one individual who advertises ‘thrift’ as a style
should pay rent for one month with money that can built block of flats
in Anambra State and still retain the moral code to carry on the
contradiction.

Consequently we reject the crude and rootless propaganda attempted by
Obi’s aides from the wrong station, on the wrong issue and at the
wrong time, and call for real explanation from Mr. Peter Obi, facing
Nigerians eye-to eye and not proxy scripts, dispatched on the run.
–