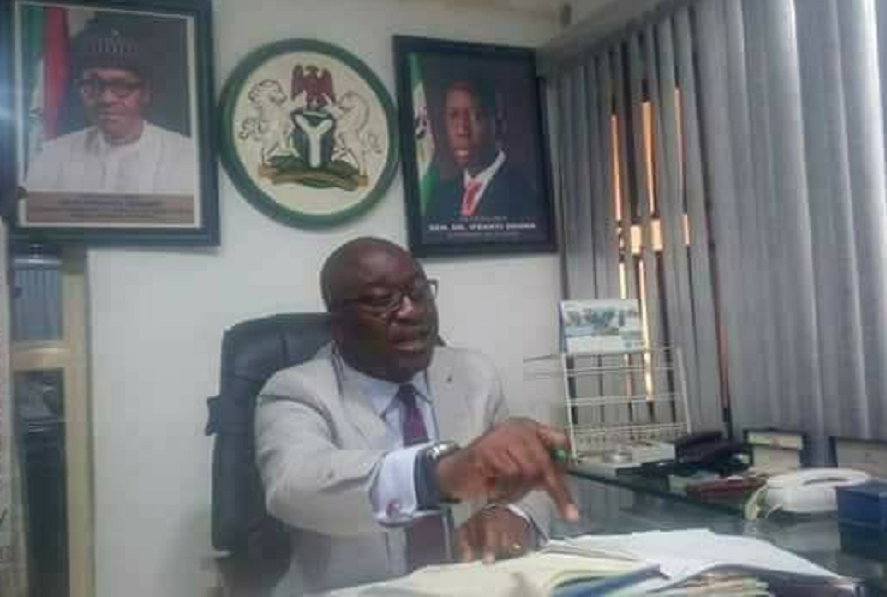 The trade of words between the Delta State government under Mr Ifeanyi Okowa, primary and secondary school teachers in the state took a new twist as the state government heaped abuses on teachers for daring to demand what is rightfully theirs.

“The Escravos Line that carries most of the oils we sell from Delta State has been down and as I speak with you now, they are just completing repairs. They have not started carrying oil through that line. So, that is the only hope we have for us to be able to sell the 2.1 million barrels. We are now selling at a lower price and the number of barrels we are expected to sell, we cannot sell. Are we truly not under recession? He asked.

The state government said the various meetings convened by the Head of Service (HoS), Mr Reginald Bayoku, the Commissioner in charge of Basic and Secondary School Education, Mr and the governor of the state, reveals that the request of teachers were not grounded.

The Commissioner for Information, Mr Patrick Ukah who made the position of government known Monday in his office said, “We have held a meeting headed by the head of service another headed by the commissioner and another one headed by the governor. It was obvious that their argument was baseless”.

Ukah noted that the payment of primary school teacher’s salaries was a constitutional provision for the local government councils and not state government, wondering why the issue has been trivialized by the teachers.

“And the basic issue is that the federal government in their laws stated that primary school teachers should be handled by the local government. That was why from the old they were taking 10 per cent initially but they now increased the percentage of the local government”, Ukah pointed out.

He disclosed that primary school teacher’s salary in the state is about N1.7 billion while their counterparts in the secondary school is almost about N1.8 billion, “each of them are ranking above N1.5 billion”, noting that the state government has squeezed the local government chairmen, “they can spend anything except salaries are paid”.

See his analysis, “Now assuming JAAC comes and the whole local government in Delta State say is sharing N2 billion then you remove N1.8 or N1.7 what is left? And when you remove it, you will pay those primary school teachers. What of the other workers in the local government who by today are been owed 4, 5, 9, 10 and 13 months but those ones did not go on strike because they understand where their problem is coming from”.

“Now some local governments, by the time you make that deduction and they are getting minors X, how will they be able to pay teachers? Because it is based on your own allocation that we make deduction to pay teachers’ salaries”.

“That is why you find out that some are fully paid, some are not fully paid because there is a way they calculate it. Why are you turning it to a different issue entirely? And the job of the state government is not to pay primary school teachers”, he stressed.

Okowa’s aide explained that in their last JAAC meeting there was not enough money to pay primary school teachers, “what we are talking about is December, January and February and that December was ready after JAAC, they now said these other people are the same workers of the local government, when we pay you one month, we pay these other people one month. Let us do it for like three months. Maybe along the line this thing may increase, the teachers said never”.

“Then government now said, gentlemen let us be fair to everybody. Since the money can be enough to give to everybody 81 per cent of their salaries, remaining only 19 per cent. Can you please take 81 per cent so that the 19 per cent, let us watch it in the next three months, if there is no improvement, we will come back and pay the remaining 19 per cent then we continue, maybe along the line there will be an improvement, they said no”.

“So, now assuming ALGON goes on strike. Who will even prepare that salary for the teachers? But the ALGON that is doing the work for you and you are teaching, you don’t think they deserve anything. It is not between us and you, is for them to be reasonable. It means that there is something beating an external drum for them and they are dancing to it and we will not take it as a government”, he threatened.

As at last week Tuesday, we were in negotiation with the governor, they came with all the demands, we were there for four hours and it was obvious that their request was unreasonable. They came with a 10-point request. That 10-point was narrowed to only two in terms of discussing each of them one after the other, “They are just most unreasonable in their request”, Ukah reiterated.