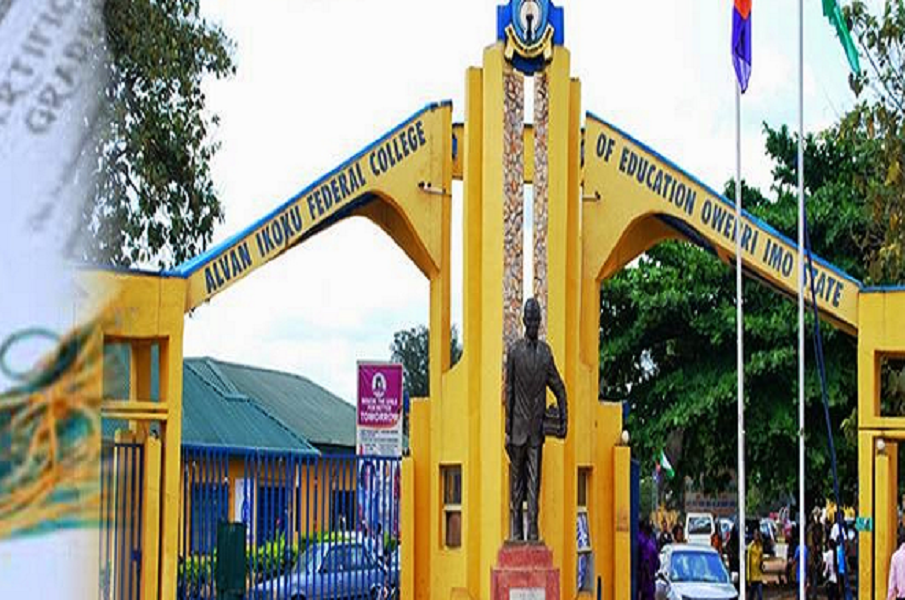 Although Dr. Blessing Ijioma, provost of Alvan Ikoku Federal College of Education, A.I.F.C.E is allegedly neck deep in schemes to serve out her second tenure soon to be cut short by her imminent retirement age, the battle of succession has commenced in earnest in the institution.

Findings by 247ureports.com revealed that the institution is now a theatre of multiple schemes and intrigues from the provost who is due to proceed on three months accumulated leave from May 2, 2017 and the various interest groups and individuals angling to take over from her.
At the moment, two members of the school management namely Dr. Charles Ugwuegbulam, who incidentally lost out to Dr. Ijioma in the last contest and ABC Duruaku, are the two individuals who have openly declared interest and commenced, intense lobby and struggle for the seat.
However, while the two are engaged in the business of struggling for the seat, Dr. Ijioma is said to be leaving no stone unturned in her bid to stay put until her four years tenure lapses in early 2019.
Sources told 247ureports.com that the provosts alleged plot to stay on got blown up early this year when the management omitted her name from the list of workers of the institution due to retire from service sent to the National Pension Commission (Pencom) for the computation of legitimate entitlements due them.
It was gathered that this alleged deliberate omission did not go down well with some management staff of the institution who quickly drew the attention of the management to the anomaly listing out the many negative consequences it portends both for the school and the provost.
Sources informed that , the management reportedly ignored the advice of the concerned management staff because the act had the stamp of approval of top officials of the federal ministry of education, Abuja  allegedly colluding with the provost to elongate her stay having been handsomely induced by her.
At the moment, Labour Unions in the Institution are said to have woken up to the unfolding plot to elongate the provost’s tenure beyond August 2017 when she is due to bow out of service after 65 years, and have issued stern warning against such plot with a caveat that it would be stoutly resisted if it is allowed to stand by the federal ministry of education, Abuja where the provost has been lobbying to stay beyond her retirement age.
Insider sources also told our reporter that the provost in a bid to ensure she does not lose out completely is also involved in the succession struggle for her replacement as she is said to be rooting for ABC Duruaku as her successor.
She is said to be executing both elongation and successor agenda jointly, obviously to guard against last minute disappointment given that the former may face array of formidable obstacles and growing opposition that may collapse it.
But, even at that, Duruaku’s aspiration it was reliably gathered may not fly as he does not possess the minimum requirement for the post which is a doctorate degree.
On the other hand, Dr. Ugwuegbulam who narrowly lost to the incumbent in the last contest and whose burning desire to occupy the seat is still aglow is said to have all qualifications required to run for the office and consequently, is gunning fro the office.
He was once the dean of school of education for many years and holds a doctorate degree for over twenty years, a feat that makes him one of the oldest academics in the school.
Dr. Ugwuegbulem and those rooting for him are said to be confident the seat would not elude them again if due process, justice and rules governing the selection process are strictly adhered to in electing the next provost.
Meanwhile, when contacted an aide to the provost denied any succession battle is ongoing in the institution even as he refused to answer the question on the provost’s imminent retirement referring it as a personal matter for the provost.
According to him rather than say the institution is being torn apart by succession war, it is better said everybody is happy and excited because the institution university status which was taken away by the present government upon assumption of power may soon be restored.
This he added is being done courtesy of a bill seeking to restore that status which was read a second time on the floor of the senate last week through the instrumentality of Senator Samuel Anyanwu, who represents Owerri Zone in the Senate.