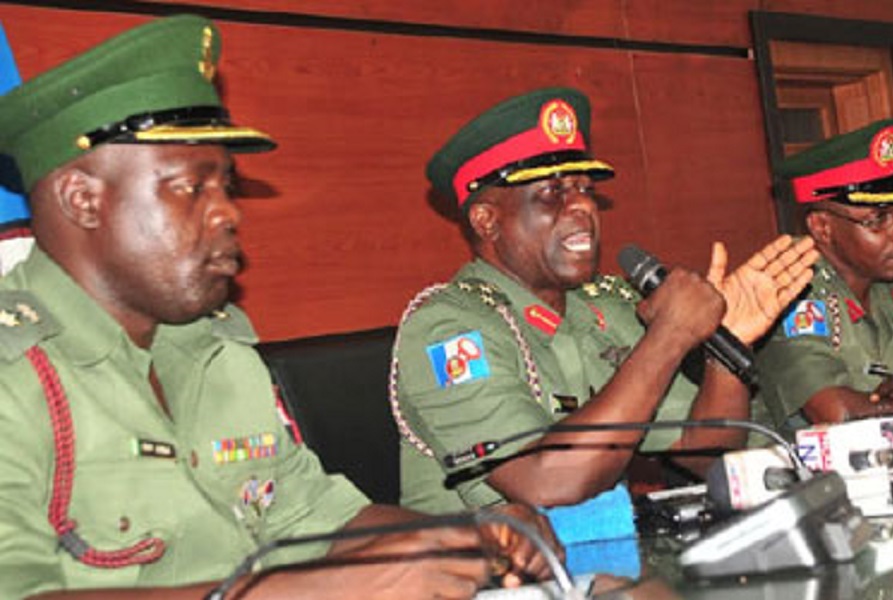 The murderous Nigerian Army have been caught in another web of lies, this time from one Colonel Aminu Iliyasu described as the Deputy Director of Army Public Relations of 6 Division of the Nigerian Army based in Igweocha (Port Harcourt). A further check on this so-called Colonel revealed that he was promoted to his current rank based on ethnic quota system because he was not qualified for such promotion if properly evaluated by merit as with most uneducated Hausa Fulani officers of the Nigerian Army.

The now customary kill and deny tactics of the Nigerian Army is once again at play. This is not the first, neither is it going to be the last time that the blood thirsty state owned terror group known as the Nigerian Army will commit mass murder and shamelessly come out to deny it. The list is endless, from IPOB massacre in Onitsha, Aba, Igweocha, Nkpor, Asaba, Shiite massacres in Kaduna and Kano among others. International human rights groups have consistently labelled the Nigerian Army as perennial liars incapable of ever telling the truth when it comes to their culpability in the mass execution of unarmed civilians.

A Tribune newspaper publication quoted this lying quota-system Col. Aminu Iliyasu as saying that the massacre of Biafrans at Igweocha on the 20th of January, 2017, “was not only false and malicious, but also existed in the figment of IPOB’s imagination.”  This illiterate and clearly unreasonable Hausa Fulani Jihadi quota-system Col Aminu Iliyasu also stated that “despite all provocative attempts occasioned by the stoning of security agents and the smashing of commuters’ windscreens by the violent protesters, troops refused to be cajoled into the criminal gang’s trap to fire a single shot.” In an attempt to further misinform the public, the obviously inarticulate and grammatically challenged Islamic quota-system Col. Aminu Iliyasu concluded that “the violent protest was subsequently subdued with the use of tear gas and arrests were made by a sister security agency, with no casualty recorded on either side.”

IPOB will like to remind this quota-system Colonel that the General Abdulsalami Abubakar-written Nigerian Constitution which he referred to is very explicit on the responsibilities of the Nigerian Armed Forces (not just the Army alone) especially in Section-217(2) and this does not in any way stipulate using live ammunition on peaceful and unarmed civilians. We will also like to remind the clearly illiterate quota-system Col. Aminu Iliyasu that security agencies, media organisations, foreign embassies, and specifically, the commissioner of police in Rivers State were all informed ahead of time, of the Pro-Trump rally, through an official letter signed by the leadership of IPOB.

This ignorant quota-system Colonel must understand that a rally or even a protest is not an “armed rebellion“ that will warrant deployment of “troops of 29 Battalion of Nigerian Army“  with a mandate to fire live bullets at peaceful and unarmed civilians. May we ask this quota-system Col. Aminu Iliyasu why the same deployment of troops with the mandate to slaughter, was not carried out on those who protested against President Trump in Abuja and Abuja on the same date? How come troops were not deployed to shoot and kill civilians during the recent “anti-Buhari“ protest that was led by the likes of Charles Oputa a.k.a. Charlie Boy? Why must the Hausa Fulani dominated Islamic Nigerian Army and Police regard every IPOB assembly or rally as an opportunity to embark upon some kind of mini Jihad designed to kill as many non Muslims as possible?

The greatest and best highlight of the pack of lies in the statement by the confused quota-system Colonel is where he stated that “it is however worrisome and disturbing for anyone to falsely accuse troops deployed in support of civil authority who conducted their duty professionally under the beaming lenses of cameras of allegedly killing 11 citizens of our great country.“ IPOB is extremely pleased that the quota-system Col. Aminu Iliyasu is aware that what transpired that day was captured on pictures and videos as most of the unspeakable atrocities of the Nigerian Army and police are. On his insinuation, borne out of panic, that IPOB will post “old vidoes and pictures from our archives“ in social media, we advice the quota-system Colonel not to worry but to leave the authentication of the evidence we have to the civilised panel of Judges at the International Criminal Court (ICC). It is reassuring to observe that at least the lying Nigerian Army is aware that all their murderous outrage on the 20th of January 2017 were captured on video.  The quota-system Col. Aminu Iliyasu and his co-murderers should be more concerned with how to fortify their defence before the Judges at ICC in The Hague.

To commit Jihad inspired mass-murder with the mindset that it could be explained away by a hurriedly and a haphazardly written press statement from an illiterate quota-system based Hausa Fulani Colonel of the Nigerian Army is the greatest of all wishful thinking. By the time the quota-system Col. Aminu Iliyasu and his co-murderers mount the interrogation box at the ICC, then we shall know if the massacre of peaceful and unarmed Biafrans on the 20th of January 2017 at Igweocha is “a mere propaganda by a separatist group.“ As one of the world’s greatest boxers once said, “you may run but you can never hide.“

For the quota-system Col. Aminu Iliyasu and his co-murderers, their lies have caught up with them and very soon, they shall face justice.

We assure the entire world that everyone involved in the shedding of the blood of Biafrans shall never go scot-free, not even the lying illiterate quota-system Col. Aminu Iliyasu.