The embattled Secretary to the Government of the Federation (SGF) Engr. Babachir David Lawal, has said that by the time President Muhammadu Bubari finish his eight years, the country won’t be compared to what it was before the 2015 general election.

Lawal said the President was building a nation that will be the pride of all Nigerians which nobody can upturn because of the solid foundation being laid by the government.

Addressing a pro-Buhari rally organised by Citizens Support for Good Governance in Nigeria (CSGGN) at the Unity Fountain on Tuesday in Abuja, Lawal assured Nigerians that the Buhari government was building an economy that nobody can upturn even after he leaves office after eight years in power.

The protesters in their hundreds matched on the streets of Abuja chanting supportive songs from Unity fountain to the main entrance of the Presidential Villa with placards of difference inscriptions of the President’s achievements.

The SGF said “Nigeria will never go back to the position it was before 2015. The foundation being laid by the government is solid. And nobody, even after the president has finished his eight years, can ever take us back to the pre-2015 days. This, I can assure you.

“I assure Nigerians that the president is aware of the temporary suffering we are going through. It pains him. But the pains have to be borne this way for prosperity and goodness to return to our country. Once more, I want to thank you for the support you have shown this government.”

Lawal added that “I am here to thank you for the support you have extended to this government. As a government, we are encouraged by your support. It is this type of support that encourages the president to do more. We want to assure you that this government is on top of the situation.

“As much as we understand the challenges that we are facing, there is no cure without medicine. It is for no reason that quinine is very bitter. But after you have taken it, you get well.

“Baba Buhari didn’t anticipate the problem that we are in. I am sure you are all aware. The people who caused this problem are the one challenging the government. I tell you that they will fail in the name of God. In fact, they have failed.

“The people who caused it are not worried at all. Shamelessly, they accused the president of not performing. And in fact, some of them wished him dead. But I can assure you that by the grace of God, he will outlive all of them.

“I assure you that by the grace of God, in the next one year, Nigeria will have a booming economy. We know what they were doing to try to sabotage the activities of government aimed at bringing Nigeria back to economic prosperity. But the president is also aware. They will fail.”

Also addressing the protesters, Senior Special Assistant to the President on Media and Publicity Mallam Garba Shehu, said the war against corruption being fought by the Buhari government has several enemies with resources much more than government resources, adding that without such support, the fight will not be won. 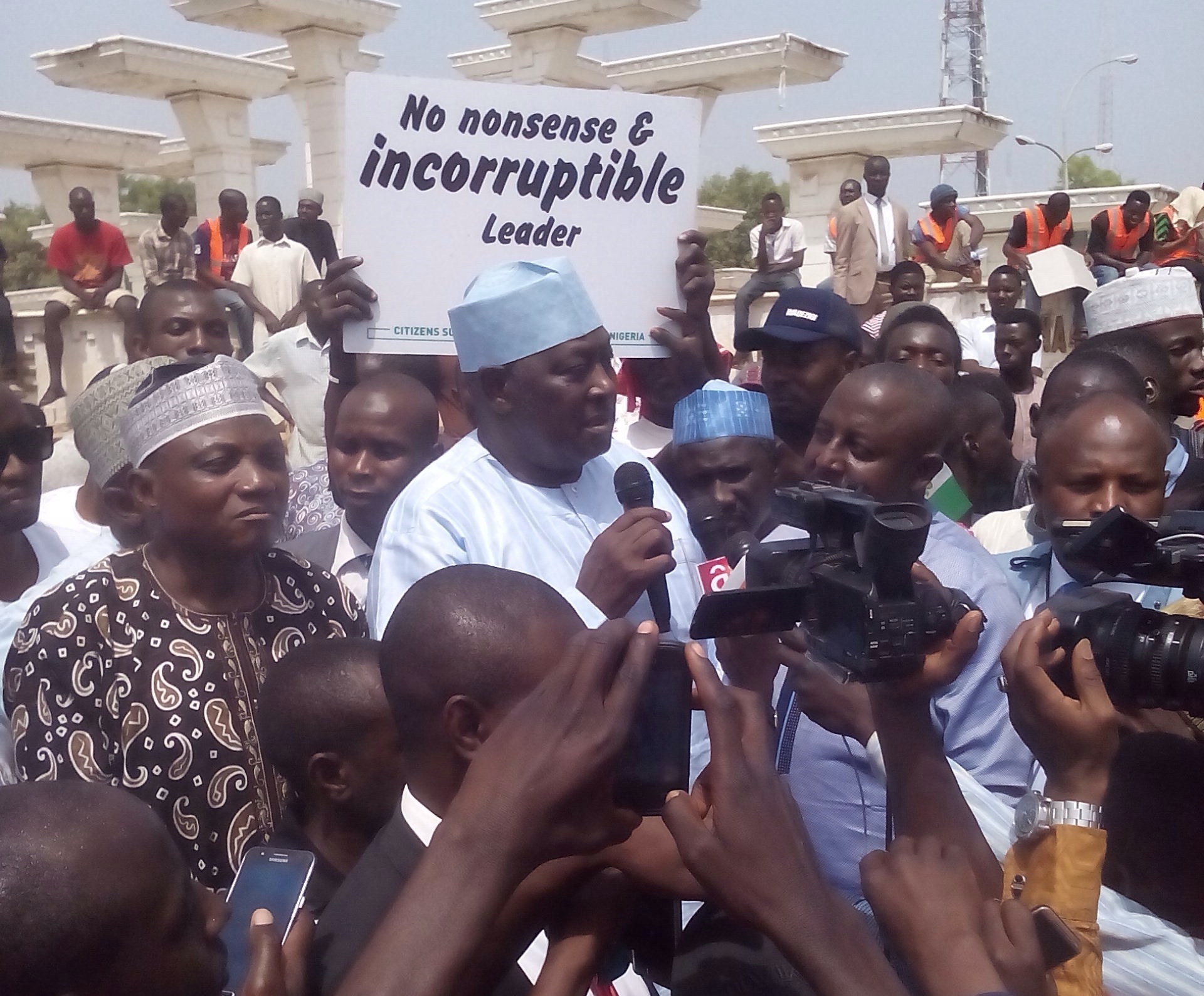 Shehu who apologised for the protesters being turned back at the gate to the Presidential Villa said: “There was a communication gap at the Villa gate because the police there did not know who was coming and I hope we will learnt from this.

Also speaking, Convener of the Citizens Support for Good Governance in Nigeria, Comrade Moses Abdullahi said the country was passing through a difficult phase as a result of bad governance since the return to democracy in 1999.

He said  “Nigeria is going through a difficult phase, a phase not of the making of this administration, but rather a consequence of decades of bad governance, decay and maladministration by a few under a banner now synonymous with corruption.

“Nigeria can only change when we support the government and do our bit and  not allow ourselves to be used as agents of destruction and political thuggery.

Abdullahi argued that wit the introduction of whistle blower policy by the government, a staggering N150 billion looted funds were recovered, while about N2.9 billion is being saved monthly from the expulsion of names of ghost workers from the federal payroll.