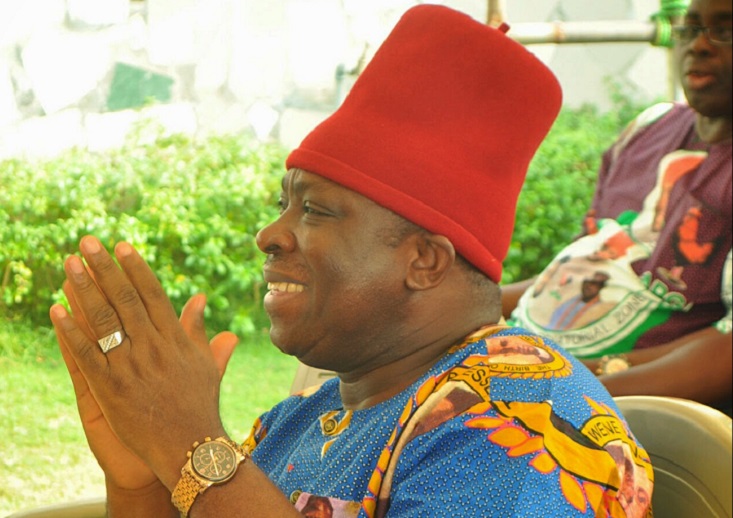 The candidate of All Progressives Grand Alliance (APGA) in the long-delayed Anambra Central rerun election, Chief Victor Umeh, has once again appealed to the people of the senatorial zone to remain calm and patient.

Speaking in an interview, Umeh, who is the immediate past National Chairman of APGA, assured the people that the rerun poll would hold, despite the antics of some desperate politicians who, according to him, have lost out in the game, yet, they are doing everything to frustrate the conduct of the exercise with frivolous court cases.

The rerun poll ought to have held on March 5, 2016, but was postponed indefinitely by the Independent National Electoral Commission (INEC), to enable it appeal an Abuja High Court ruling compelling it to include the Peoples Democratic Party (PDP), against the judgement of the Court of Appeal that disqualified the party and its candidate from participating.

The APGA candidate, who was set to clinch victory before the postponement, observed that “What played out in Anambra Central was what played out in Kogi East and Kogi Central senatorial districts. The APC Senators, two of them were removed because they did not conduct primaries. PDP challenged them at the tribunal on the ground that they did conduct primaries. And the elections were nullified and their candidates were also disqualified by the Court of Appeal. The rerun elections ordered by the Court of Appeal had since been concluded in Kogi East and Kogi Central senatorial districts without APC participating in the rerun. In the case of Anambra Central, PDP doesn’t want to give up. Their candidate has also gone to the Supreme Court, I mean their then candidate, who is now no longer a PDP member, had gone to the Supreme Court to seek reinstatement, even when the final court that handles National Assembly matters is the Court of Appeal. So, they are doing everything to deny the people of Anambra Central the right of representation. Why PDP is struggling to be part of an election they are already out of the way, their candidate who was disqualified by the Court of Appeal is also struggling to get reinstated outside the provisions of the law. They’ve boasted openly that since they can no longer occupy that senatorial seat that nobody will occupy it until 2019. And they are working hard to frustrate the Court of Appeal from hearing the Appeals pending at the Court of Appeal against the judgement of the High Court that ordered that PDP should take part in a rerun after their candidate has been disqualified. They are doing everything to frustrate the progress of the matter at the Court of Appeal. For me, I feel so bad because there are so much to be done for our people using that opportunity. But they have no option other than to be patient. I am urging them to be calm and patient. The antics of those causing this unnecessary delay will be exhausted very soon. The Ekwunife’s adventurous appeal at the Supreme Court – it is an adventure – has been argued on the 14th of November, 2016 and the Supreme Court has reserved judgement for 10th of February, 2017. If on that day the Supreme Court upholds the law and puts her case to rest, that distraction will be completely over; her own distraction will be over. Then we will accelerate action on the pending appeal at the Court of Appeal for which they have gone on an interlocutory appeal to the Supreme Court. So, God willing and God being our helper all those protracted issues will be resolved. And the election will be conducted by God’s grace.”

He added: “I know the good people of Anambra Central are missing a lot already, because if I have been there before now, the story would have completely changed. But they must know that anything that will be good, before it will come your way; you have to put up a very strong fight for it. I am assuring them that even if it is two years that we are able to salvage in the current tenure they will see the difference, very big difference than what they have been seeing before. And like I have said before, they will just have to be patient because there is no alternative to doing what is lawful. If we don’t fight all this brigandage that has been going on in Anambra State during elections – the manipulations they have been doing in this state, there will be no stop to it. So, by the time we go through the whole hog of this Anambra Central senatorial district issue, people will learn their lessons. People will be prepared to submit themselves to the provisions of the law. Anybody who wants to contest election will know that there is no shortcut to obtaining the mandate to represent the people. But following what the law says; submit themselves to the will of the people, instead of relying on arbitrary powers that will be used to subvert the electoral process either within your party or in the process of the election itself, trying to bond the Independent National Electoral Commission and twist them and take over their duty because you are desperate to get to office. When elections are called in the future, people will be prepared to be vigilant and look at what the law say; keep yourself in line with the laws and go to the people to obtain your mandate, without keeping your hope in rigging elections, manipulating the security agencies and the Independent National Electoral Commission.”