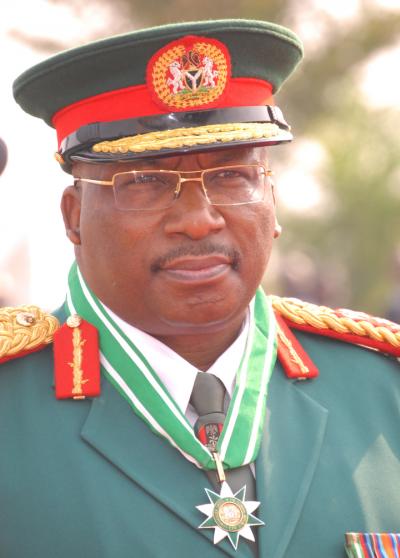 Former Chief of Army Staff Lt. Gen Abdulrahman Dambazau on Thursday said he was not desperate about holding any political appointments in the country.
Gen Dambazzau, the first Nigeria army chief to hold a PhD degree, and currently a Senior Visiting Fellow of the Centre for Peace, Democracy and development, University of Massachusetts, Boston, as well as a fellow and Associate of the Weatherhead Centre for International Affairs, Harvard University,   said he is not desperate holding any political appointment.

Loading ...
He however denied that he was  in the race for the National Security Adviser (NSA), a position which was given to retired Major General Babagana Monguno, on Monday by President Muhammadu Buhari.
“What race? There was no race for the office of National Security Adviser (NSA). And if there was one, I was not a contestant. For very good reasons, people may have their expectations, but that should not be translated as mine. Of course I will be glad to work for the President if he assigned me any task or appoints me in any capacity he feels I can contribute towards the success of the government. This is especially because I was the CPC Chairman of the Security Committee in 2011 and he personally appointed me and also in 2015 as Director, Intelligence and Security of the APC Presidential Campaign Council.”
“At any rate the President has the prerogative to appoint any person of his choice to any of the available positions, but in the final analysis it is God that determines who becomes what. My prayer therefore is for the Almighty God to guide President Muhammadu Buhari in this very important task of nation-building He has given him.”
He continued, “My relationship with Mr. President does not hinge on political appointment. Wether or not he assigns me to a particular office, my resolve to ensure that he succeeds remains unshakable. He is a person I highly respect and I am ready to support him throughout his tenure. I am not doing him a person favour, but I consider it as a duty to contribute in fixing Nigeria. I have immensely benefitted from Nigeria after reaching the peak of my career as a General and commanded the army, and acquired the highest educational qualification (PhD), it is only reasonable to consider this opportunity as a payback time.”
“I am not unaware of some persons desperate to soil my name, mainly out of envy. I have built a very good reputation both home and abroad, I doubt very much if anyone can easily destroy it. Such people should not see me as an obstacle to their ambition, but like I said earlier, power and wealth belong to God and He gives whomever He wishes at the timeHe wishes.”
Before he retired from the army as the 17th Chief of Army Staff, in 2010, he was the General Officer Commanding (GOC), 2 Division, Ibadan. Before then he was the Chief of Army Standards and Evaluation; a Directing Staff and Director, Higher Military Organization and Operations at the then National War College; Principal General Staff Officer (PGSO) to the Hon Minister, Ministry of Defence; ChiefInstructor, Support Weapons Wing, Nigeria Army School of Infantry; Academy Registrar, Nigeria Defence Academy (NDA); Commander, Provost Groups of 3 Division and 1 Division, respectively.
As a young officer, he served as ADC to the Chief of Army Staff and special Investigator, Special Investigation Bureau of the Military Police. Outside the military, he was a part time lecturer in Criminology in the Faculty of Law, Ahmadu Bello University for about four years. In the last five years since his retirement, General Dambazau has been engaged in business as security consultant and estate development. He is also the Founder and Chairman, Foundation for Victims of Child Abuse (VCAF).