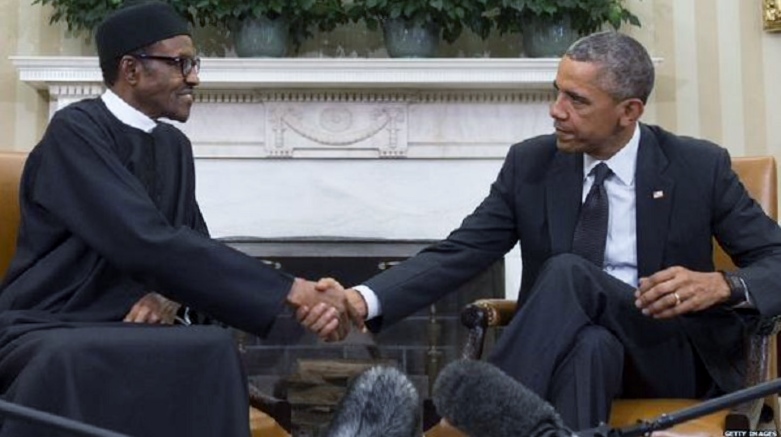 President Muhammadu Buhari has appealed to the United States Government and US Congress to review Nigeria’s status regarding the application of the `Leahy Law’ to enable Nigeria access appropriate strategic weapons to fight insurgency.

The President made the appeal in a paper he delivered at the US Institute for Peace (USIP), in Washington on Wednesday.

He said the blanket application of the Leahy Law by the US on the grounds of unproven allegations of human rights violations levelled against the nation’s forces had denied Nigeria the necessary weapons to prosecute the war.

“In our efforts at combating the activities of Boko Haram, the new Government has sought and obtained the support of not only our neighbours, other international friends and partners.

“Regrettably, the blanket application of the Leahy Law by the United States on the grounds of unproven allegations of human rights violations levelled against our forces has denied us access to appropriate strategic weapons to prosecute the war against the insurgents.

“In the face of abduction of innocent school girls from their hostels, indiscriminate bombings of civilians in markets and places of worship, our forces have remained largely impotent.

“This is because they do not possess the appropriate weapons and technology which they could have had, had the so-called human rights violations not been an obstacle.

“Unwittingly, and I dare say, unintentionally, the application of the Leahy law amendment by the U. S. Government has aided and abated the Boko Haram terrorist group in the prosecution of its extremist ideology and hate, the indiscriminate killings and maiming of civilians, in raping of women and girls, and in their other heinous crimes.’’

According to him, this is not the spirit of the Leahy Law, and the American people cannot support any group engaged in these crimes.

The President, therefore, appealed to both the executive arm and the US Congress to examine how the US Government could provide Nigeria with far more substantial counter-terrorism assistance with minimal strings.

“The longer we delay, the deadlier the Boko Haram gets. At all events, we have re-written the rules of engagement protecting the rights of combatants and in particular safeguarding civilians in theatres of conflict.

“As we ramp up our efforts to defeat Boko Haram, we know that winning this battle sustainably will require that we expand economic opportunities and create jobs for our teeming young population.’’

President Buhari assured that his administration would improve the quality of governance; ensure that governments at all levels were responsive, inclusive, transparent and accountable, and that public institutions delivered services in a timely and efficient manner.

“We must win and sustain the trust of the people we govern’’, he added

According to the President, the fight against corruption is a full time job that his administration will carry with sustained resolve, saying he always maintained zero tolerance for corruption.

“I am even more committed to fighting this number one enemy decisively because I am convinced beyond any shadow of a doubt that the much needed impetus for our country’s survival is held back by corruption.

“I will not allow this to continue. Again, as with every action of the government that I lead, we would be fair, just, and scrupulously follow due process, and the rule of law, as enshrined in our Constitution.

I will lead by example to ensure the prudent management of Nigeria’s resources. The government will plug the leakages that fuel corruption in Nigeria.

The President noted that the future of Nigeria, indeed the future of Africa, “lies in democratic governance, not only because it is the expression of the will of the people, but because democracy can help us build fair, just and inclusive societies.

“Only in a democracy can Africa’s numerous ethnic, cultural and religious diversities find harmonious expression, and the freedoms and opportunities that come with it.’’

He called on the US Government to help Nigeria’s democratization process to gain roots by investing in the expansion of education, health and economic opportunities for the millions of youths.