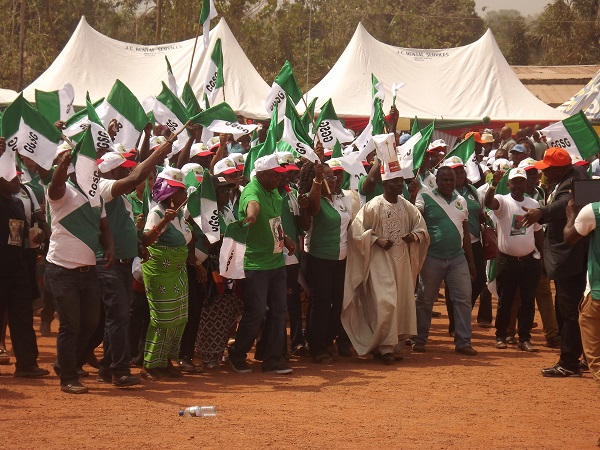 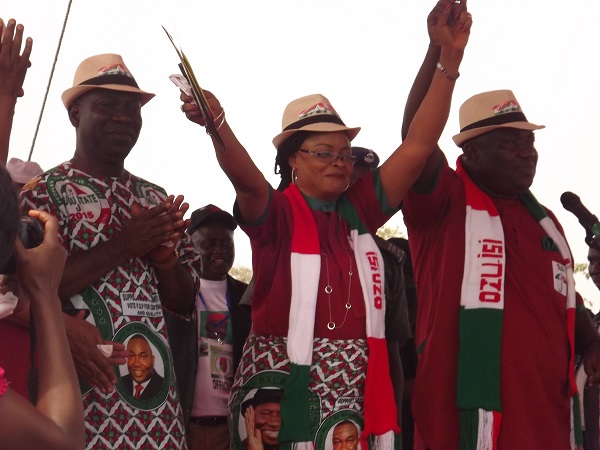 By Chinedu Aroh and Francis Ede

Ikem, the headquarters of Isi-Uzo local government area of Enugu state, was a beehive of activities on Monday as the Peoples Democratic Party flagged off its governorship campaign in the state. As early as 9am, people from the area and indeed across the state began to turn out in their large numbers to witness the grand flag-off of the campaign.

Even though the event did not start at 10am which it was scheduled to begin, the tumultuous crowd was not weighed down as they jubilantly waited for the arrival of the state governor, Barr Sullivan Chime; the party’s governorship candidate, Hon Ifeanyi Ugwuanyi, and their team to the primary school arena, opposite the local government headquarters. The event was hitherto scheduled to hold at the headquarters of the council, but the crowd overwhelmed the space, thus the change of the venue.

After the much-awaited suspense ahead of the arrival of the team, the tense moment became assuaged when Deputy Senate President Ike Ekweremandu and the senatorial candidate of Enugu East senatorial zone, Senator Gil Nnaji, graced the venue. Their coming was like the forerunner of the eventual arrival of Governor Sullivan Chime who was billed to formally present the PDP governorship candidate, Hon Ifeanyi Ugwuanyi, among other candidates of the party in the zone ahead of the 2015 general elections.

Eventually Governor Chime, Hon Ifeanyi Ugwuanyi, and their entourage arrived at the venue of the rally. Their arrival marked the climax of the event as various dance groups kept the stage to a total standstill.

Speaking at the event, Governor Chime reiterated the commitment of the PDP in fulfilling its promises to the people of the local government area. He said, “We may not have performed 100% but I know we are on track in fulfilling our campaign promises to our people. Voting for the PDP is the sure way to sustain this. Since the current democratic dispensation, Isi-Uzo has remained PDP, and I urge you not to relent. I am here to formally present to you our governorship candidate and other contestants ahead of the coming general elections. I will surely come back to thank you for your support and steadfast which you render to my administration so far. I am convinced that you will accord our incoming governor the same. Our flag-off today in Ikem is beyond what meets the eyes.”

Hon Ifeanyi Ugwuanyi, after presenting his running mate, Hon Cecilia Ezeilo, said, “We have a message of hope to our people. Under Governor Sullivan Chime, Enugu state has witnessed massive infrastructural development. We are grateful to Governor Chime because of his goodwill in the state. It is against this backdrop that we have adopted the policies of his administration for continuity. I call on you to vote for President Goodluck Jonathan and the PDP contestants in the state to ensure total transformation of the country. He has done well in so many ways, including the Enugu International Airport, the second Niger Bridge, among others. Our team will sustain the achievements of Governor Chime, although I must confess that wearing his shoes would be pretty difficult, but I assure you that we shall not let you down. Above all, get your permanent voters’ cards because you power lies in your votes.”

The chairman of Isi-Uzo local government area, Hon Augustine Nnamani, pledged the support of the entire people of the local government area for the governorship quest of Hon Ifeanyi Ugwuanyi and other PDP contestants. He poured encomiums on Governor Sullivan Chime whom he said laid a solid foundation through his giant strides in the state to make the party very firm.

He said, “I recall the last campaign of Governor Chime in Ikem where he promised that the Ikem-Leke road would be constructed before the next time he would come. Hitherto that road had been a nightmare for us. That promise has been fulfilled as we now ply the road with joy. He has also provided electricity in all the communities in our local government area. Our pregnant women also enjoy free medical services. Up until now, we had seen projects commissioned on televisions for our people, but today it is real. We promise you that we shall vote for the candidates of the PDP overwhelmingly.”

The chairman also called on government to construct the Ehamufu-Nkalagu road which he described as very bad. He added that the democratic dividends which are thriving in local government areas in the state are a result of Governor Chime’s magnanimity in releasing local government funds to local authorities as and when they are due.

Also speaking, the PDP chairman in the local government area, Mr Ugwueze, said Governor Chime had built an image of hope in the state. He thanked the governor for endorsing Hon Ifeanyi Ugwuanyi to succeed him, describing it as the greatest parting shot he could leave behind for the people of the state.

He said, “I am without doubt that Hon Ifeanyi Ugwuanyi will emulate Gov Chime. Hon Ugwuanyi will be the bridge-builder in the state. We are optimistic that he will toe Chime’s line to sustain the level this state has attained so far.”

Dr Emeka Ogbuabor, PDP House of Assembly candidate for Isi-Uzo, thanked Governor Chime for transforming the state. He further thanked him for enabling the candidature of Hon Ifeanyi Ugwuanyi, and urged the electorate to vote for the party in the forthcoming general elections.

“The PDP has been winning every elective position in this local government since the inception of the current democratic dispensation. I can assure you that the same tempo will be sustained,” he said.

Dr Kingsley Egungbe, representing Enugu East federal constituency in the House of Representatives, said the flag-off of the PDP gubernatorial campaign in the local government area is symbolic, and promised an overwhelming support for the party in the 2015 general elections.

He said, “Isi-Uzo LGA is Hon Ugwuanyi’s parent local government area. The flag-off of the campaign here is a testimony of the level of trust this party has on us, and we promise to reciprocate the gesture by voting for the PDP en masse.”

The senator representing Enugu East senatorial zone in the National Assembly and also the candidate of the party, Senator Gil Nnaji, said Governor Chime had made victory easy for all PDP contestants in the state through his sterling performance in transforming the state. He also commended the choice of Hon Ifeanyi Ugwuanyi as the governorship candidate of the party in the state, describing it as the wisest choice. He promised to intensify efforts to construct the Ehamufu-Nkalagu road which he said he would do in conjunction with the stakeholders if elected again.

The state’s chairman of the party, Chief Ikeje Asogwa, thanked the electorate and the PDP stakeholders for their support for Governor Chime’s administration and reiterated the sustenance if Hon Ifeanyi Ugwuanyi is elected governor. He used the occasion to donate one hundred and ten bags of rice to the eleven wards in the local government area.

Highlights of the event were the presentation of the party’s flags to all the candidates of the party from the zone vying for various elective positions ahead of the general elections. There were also cultural displays.