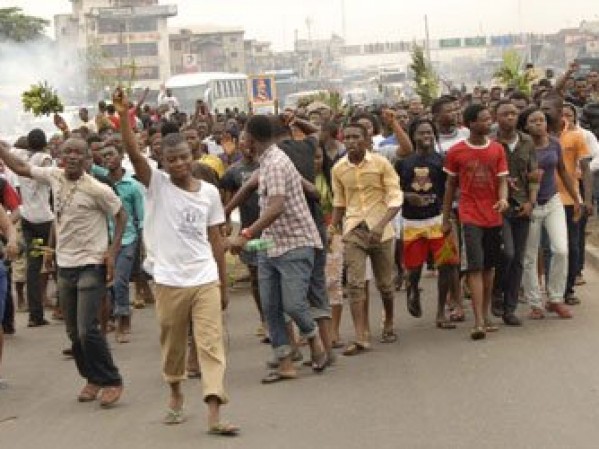 …say ‘You’ll meet us in Court’

About youths including men and women numbering over 3,000 have given one week ultimatum to the Presidential candidate of the All Progressive Congress (APC), Gen. Mohammadu Bhuari (rtd) to table his certificates before the Independent National Electoral Commission or they will go to court.

They were led by the National Coordinator of Coalition of Nigerian Youth for Good Governance, Godwin Meliga and a female activist, Princess Amarachi Nlumanze.

The protesters, who carried placard with various inscriptions; ‘Nigeria is bigger than one man’, ‘Mr Integrity show your certificate’, ‘Obey the law’, urged Bhuari to comply with the electoral laws.

Speaking with journalists at the rally which commenced at the Unity Fountain, Meliga threatened legal action against Buhari, if he fails to comply with the electoral laws and show his certificate.

“Buhari has been campaigning, telling everybody that he is Mr Integrity that promised to come and fight corruption, there is an allegation that he had no Secondary School Certificate, he should come out and show his certificate. He should come out and tell us whether he went to school or not,” he said.

Citing former Speaker of the House of Representatives, Hon. Dimeji Bankole, who came out publicly with his NYSC certificate after he was alleged of not participating in the one year mandatory national youth service, Meliga told Buhari to do the same thing by coming out openly with evidence to dispel the allegation.

He said; “Nigerian youth are asking him to come out and present his certificate, because we don’t want an illiterate to rule us anymore.

Asked why the demand now? Meliga said; “This is the first time we are hearing about this. In the past, we do not know and the INEC had been silent about this, but some good Nigerians had verified from the INEC, and today we know that he had no certificate. PDP is not jittery over Buhari, we have beaten him before and we will still beat him.”

In her reaction, Nlumanze said the protest was to compel APC Candidate to do the right thing by fully complying with the electoral law.

“We want people to do the right thing, we want justice, and we cannot avoid repeating the same mistake we have been making all this while. That is why we came up here to say, show us your certificate, if you say you are Mr. Integrity.”