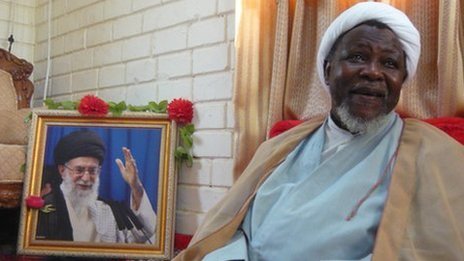 Yesterday around 2 o’clock in the morning, a convoy of armed soldiers stormed Zango Area and blocked at all roads leading to the Markaz, which also serves as residence of Ameer of Kaduna zone of the Islamic Movement in Nigeria, Malam Muhammad Mukhtar Sahabi.

According to eye-witness, the military personnel fully masked and combat-ready were in 7 vehicles, and took positions at different routes leading to the Markaz.

Undecided and obviously frightened and confused, the night raiders suddenly left the area around 4 o’clock in the morning, after more than two hours of aimless surveillance under the watchful eyes of Hurras (Volunteer Guards) at the Markaz.

Sources revealed that, the security operatives were from Abuja acting under orders from above to arrest Malam Mukhtar Sahabi.

The attempt, according our sources, might not be unconnected with the recent statement of Malam Mukhtar Sahabi at the recent rally in Kaduna, during which he warned Nigerian government to steer clear of Sheikh Ibraheem Zakzaky and that any attempt on the life of Leader of the Islamic Movement in Nigeria will attract supreme sacrifice of members with the last drop of their blood.

The scholar had equally on several occasions cautioned Nigerian government on the series of attempts to kill Sheikh Zakzaky.

A resident in the area who pleaded anonymity said, “If they want to arrest or kill him because of his uncompromising statement on Zakzaky, then they have a lot of arrests and killings to do, as all of these Shi’ites share the same view”.