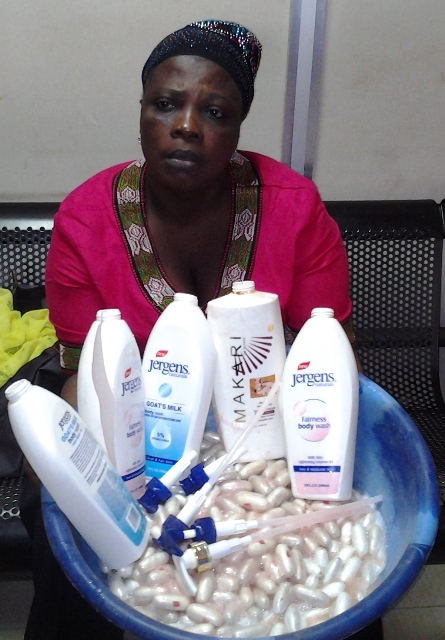 Officers of the National Drug Law Enforcement Agency (NDLEA) at the Murtala Muhammed International Airport (MMIA) Lagos have apprehended a 51 year-old mother of four children with 3.44kg of cocaine and heroin hidden inside body cream. The drugs were found in her possession during the outward screening of passengers on an Emirate flight to China.
NDLEA Airport commander, Hamza Umar who confirmed the arrest gave the name of the suspect as Alade Muyinotu Alade. According to Hamza, “Alade Muyinotu was caught with drugs at the central screening area on her way to China. During search, 150 wraps of cocaine weighing 1.725kg and 150 wraps of heroin weighing 1.715kg concealed inside body cream were found inside her luggage. The total weight of the drugs is 3.44kg. The case is currently under investigation”.

In her statement, the suspect said that she was offered 4,000 dollars to smuggle the drugs to China. “I used to import clothes from Dubai and China when business was going on well with me. I even had a shop at Balogun market. My problem started when I lost my shop and was unable to rent another one. Since then things have gone from bad to worse. My major concern is that I have four children living with me and I am separated from my husband. It was a friend that introduced me to the people that gave me the drugs. They bought my return ticket and offered me 4,000 dollars” Alade stated. She hails from Kwara State.
Chairman/Chief Executive of the anti-narcotic Agency, Ahmadu Giade described the action of the suspect as unfortunate. In his words, “China is one of the countries with capital punishment for drug trafficking. It is unfortunate for a mother of four children to get involved in such a criminal act. If not for our vigilance that led to her arrest, she would have been killed abroad and her children left to suffer endlessly” Giade stated.
The NDLEA boss urged stakeholders to be more dedicated to the country’s drug control efforts, stressing that a drug-free society is a crime-free society.
The suspect will soon be charged to court.
Ofoyeju Mitchell
Head, Public Affairs,