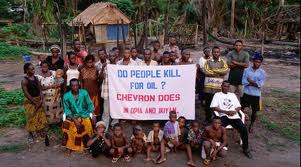 There were widespread community protests Monday against the marginalization of the people of Izombe Clan in Oguta Local Government Area of Imo State and the unpaid compensation for the environmental atrocities committed by Addaxx Petroleum Limited and Chevron Oil companies in the area.
The aggrieved host communities— Umunwama, Ndeuloukwu, Ugbele and Aboshi— blocked all entrances to the community, sang songs of war against the oil exploration in the area.
The people were demanding compensation for the numerous oil spills within the state, especially from Addaxx, which they accused of neglecting the communities since more than their 50 years operation in the area, which had destructive and deleterious effects on the environment and adversely affected the socio-economic development of the inhabitants of the areas of impact.
Local youth and women took to the streets, chanting protest songs, mounting roadblocks and banners inscribed with varying messages of fury, thereby making it difficult for anyone to drive in or go back.
As the demonstrations thickened in tempo and speed, spreading across the four major oil producing communities in Izombe, Addaxx and Chevron’s gates and facilities remained closed, forcing the company to shut down operational activities. Schools were also closed down.
The people who insisted that Addaxx must leave the community, displayed curious objects like palm fronts, plantain tuskers, local deities and strange-looking cultural artifacts near the fence of the oil company
One of the protesters who identified himself as Leo, accused Addaxx of operating for over 50 years in the community without doing anything for the people, adding that even the memorandum of understanding(MOU) signed between the companies and the community had not been respected by the company.
He also  said that in the last six months, the communities had not enjoyed any electricity because the companies failed to do the needful.
“Apart from that, our crops no longer yield anything  and most of our elderly people are blind and dead because of gas flairing. The worst is that they allowed divide and rule system and causing problems for us here”.
When contacted, the Community Liason Officer(CLO) of Addaxx, Mr. Ray Emedoro stated that he was not aware of what was happening, adding however that he knew some people were protesting in the town.
When our reporter contacted the state police public relations officer, PPRO, Andrew Enwerem, he said he was not aware of any crisis or protests in Izombe but promised to contact the DPO for situation reports.