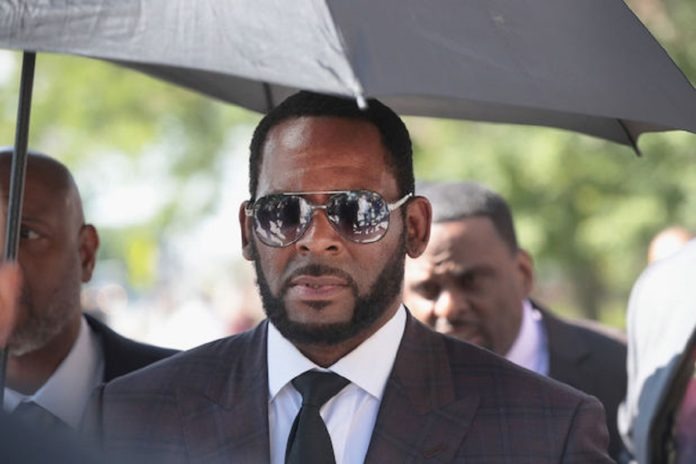 In a new development in the R. Kelly sex-crimes case, a fellow inmate in Chicago’s federal jail claims in a handwritten motion that the “government” made him attack Kelly last week.

In a four-page document on lined paper and with block lettering, Jeremiah Shane Farmer claims that officials at the Metropolitan Correctional Center in Chicago encouraged him to attack Kelly in order to get more attention for his own, unrelated racketeering case.

Farmer claims he’s a victim of government “corruption” and that COVID-19 lockdown rules have prevented him acquiring an “effective” attorney and from using the jail library to work on his legal case.

“Farmer, with no where else to turn for legal help, was forced to assault hip-hop R&B singer Robert Kelly in hopes of getting spotlight attention and world news notice to shed light on government corruption here in the Seventh Circuit,” Farmer wrote.

Kelly’s lawyers are now using Farmer’s claims to make another effort to get Kelly released from MCC on bond due to safety and COVID-19 fears.

Federal prosecutors in Kelly’s case declined to comment on the allegations by Farmer when contacted by USA TODAY.

The federal Bureau of Prisons typically does not discuss with the media what happens inside its prisons and jails, such as the MCC in Chicago.

“For privacy, safety, and security reasons, we do not comment on an individual inmate’s conditions of confinement or medical status, said Justin Long, a spokesman for the bureau, in an email to USA TODAY.

Farmer claims he was encouraged to attack Kelly during an argument with an MCC “mental health professional.”

“According to Mr. Farmer’s filing, MCC personnel told him to ‘go do it then,’ referring to attacking Kelly. It appears that MCC personnel then followed Mr. Farmer, allowed him to carry out the attack on Mr. Kelly (in his jail cell) and then only intervened after Mr. Kelly sustained serious injuries,” according to the motion filed Friday by one of Kelly’s lawyers, Mike Leonard, in the Northern District of Illinois in Chicago, which is one of four federal or state jurisdictions prosecuting Kelly on multiple sex-crime charges.

Last week, after the attack on Kelly, his lawyers said he had suffered “very minor injuries.” Leonard said in an email to USA TODAY he is not allowed to discuss his client’s medical condition, “other than to say that he took a beating.”

“We are seeking a hearing in which we would get to examine Mr. Farmer under oath, as well as the personnel involved at the MCC Chicago,” Leonard said. “And ultimately seeking his release from custody – as this is yet another argument in favor of that.”

Leonard said in his motion that the attack alone merits Kelly’s immediate release because “it further illustrates the inability of the (Bureau of Prisons) to safely house Mr. Kelly and to allow him to prepare for trial.”

A MCC document on the Kelly attack and attached to Leonard’s motion says Farmer was seen on top of Kelly in his lower bunk bed, “punching Kelly repeatedly in the head and torso.”

Kelly, 53, has already been twice turned down for release pending his trials, which have been delayed due to the pandemic. He’s been in the Chicago federal lockup for more than a year.

According to a press release on the website of the Northern District of Indiana, Farmer, 39, was one of dozens of alleged members of the Latin Kings street gang indicted in 2018 on charges of racketeering conspiracy and conspiracy to distribute drugs that included a double homicide in 1999 during a robbery of a local Hammond, Indiana business.

This article originally appeared on USA TODAY: R. Kelly: Alleged attacker says ‘government’ made him do it