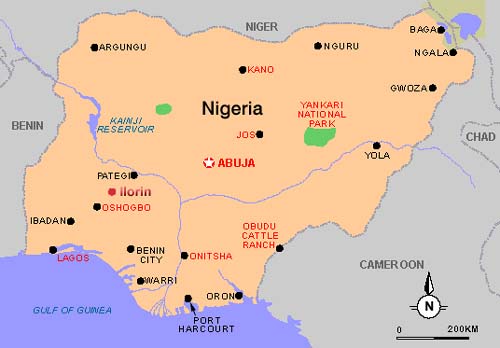 Recently a heated debate over sharing of Nigeria resources and the necessity for diversification of revenue earning avenues was raising hell amongst the bloggers of a yahoogroup. The heat was sparked by the remark that “the northerners have managed to out-maneuver the southerners in Nigerian national affairs repeatedly”. A blogger in response questioned how one can say that just because somebody suggested setting up agricultural development commission in the North? and another blogger chimed in to state that northerners aren’t as smart as the southerners. He continued to explain that the reason for his assertion is that southerners are numerous in the movies and in Medical/Health and Computer related businesses, doctors, nurse, X-ray technicians, Physical Therapy business, Home Health Care etc. He referred to them as the creative class.

The fact is the northerners have outperformed the southerners time and time again -politically and otherwise as a group. The assertion is not based on a suggestion either but on the reality on the grounds. Northerners have had an edge over the southerners ever since the early 1900s and not just due to the perils of the recent war but long before the war. The south has always taken a backseat in the arena of national affairs. In fact since the inception of Nigeria, southerners have stayed second class citizens while the northerners stayed first. The question is, why this imbalance? Is it possible to really understand that southerners may have in fact played the biggest role in creating this imbalance on herself? Could it possibly be that southerners got out maneuvered as alleged? If so, are southerners too ashamed to attest to it? Very interesting, indeed.

The focus on Agriculture as alternate means of revenue is already very evident on the grounds up North. While I will agree that lots of cash has been pumped into the region, I will also credit the northerners for being able to get the Nation to prioritize their needs. To the point that Nigeria has co-signed her loans repeatedly. They were able to make their case to the top priority – that have somewhat improved their agricultural output, food storage, food transportation and other delivery systems, irrigation, among many more. It may be true too that the observed improvement may not compare well with the amount of money loaned but in all it was a win-win for the northerners. And, it may or may not come as a surprise that Yam (the Igbo main food) is cheaper in Kano than in any place in the Igbo States from about the month of January till August. Imagine that!

Some believe it is understandable for the region to get such preferred loans because they lack any known natural resource that ranks with oil. To those folks, I would ask – why then have the south failed to get her fair share at the oil pump?  Why has the national confab lost its south-south delegates in the purported resource control negotiations? I mean that in the most responsible way.

As things stand the south is behind in the agricultural sphere. And the obvious question is – who is to take the blame?  Presently, the southern land has very little, if any, of organized futuristic investment made on her even though she boasts of millions of barrels per day at a price of about $55 a barrel. With oil money surplus now in the in trillions of Naira, what has become paradoxical is that the south presently show more need for a preferred loan than the north ever did. The question is why this disparity? Would it be responsible to conceive it as structured disparity?

I suppose most would lay the entire credit to the colonial masters and the integration formula they applied on Nigeria. But that may not completely be true because it is not as linear as it appears. The root to the imbalance or disparity date back to before the years of trans-Atlantic slave trade – during the period (I consider the “Middle Ages” for southern Nigeria) when the southerners were successfully striped and numbed of their reality/identity by the then would-be colonial masters. Although some communities resisted with real intensity such as the group in the Delta region named “Ekumeku” that fought the western intrusion in manner and tactics that mou-mou employed – but it lead to no where. So as the 1900s came around, hundreds of years later, southerners were just simply spoken for. What resulted was southerners as a block became less smarter, shined less bright and less clever. But that is not to say that individually southerners aren’t smarter, brighter, or cleverer than northerners.

The fact of the matter is simple. As a unit southerners have operated as a conquered people – conquered by her unique history with the western intrusion which earned her the reward of a refugee without a home country solidified long before the invasion of southern region by Nigerian troops. The invasion only exponentially soiled matters. If one counterbalance the two groups -the southerner on one side and the northerner on the other -it will indicate the obvious -weighing certain performance parameters such as real leadership and proper representation in the National Assembly, maintenance of cultural structure, unity, willing-ness to obey the leader, and etc will make apparent and clear the southerners have not faired well.

Now pertaining to the referenced group labeled the ”creative class” – who unfortunately may never get to ever GO BACK to live or apply their skills in Nigeria.  I am aware of them and most diasporans are aware of them. The ones that would rescue Nigeria when the wells run dry. The thing is of what use is this class if nothing can be garnered from it to add to the group as a whole? Or, is it just sufficient to just produce “Nigerian American” doctors, engineers, lawyers, teachers, etc, just to have them for the sake of having them while toiling for America? How many of the northerners is seen in America working 16hrs a shift in a nursing home? Who in their right mind would leaves his father’s land empty only to toil on another man’s land as a paid slave? Where would be the logic in that? Would that be why southerners travel so extensively and with no plans of ever returning permanently?

This class of over-achievers and their achievements adds nothing to the betterment of the group as a whole. If anything, it creates a vacuum that is continuously increasing and introducing its own complications as well. (Most of the southern future political leaders now reside in America – in places like Texas, California, The Carolinas, New Jersey and so on.) I refer to them as the people in the corridor.

Some may never accept that northerners have exhibited smarts, brights and cleverness as a group – but the facts on the ground would suggest the contrary – they have exhibited enough of it to make their case the Nation’s primary concern. Juxtaposing the performance leaves no doubt what part of the collective destiny the two regions have played in their respective interplays.

It goes without saying, in order for the next federal executive regime of 2007 to make a meaningful difference or impact, its principal task must center on dismantling the obvious regional imbalances and preferences that exist in Nigeria. I might add that as the founders of Nigeria originally intended, the tussle to regionalize Nigeria will remain the main point of contention to achieving a realistic governing model devoid of any structured discrepancies or disparities. The  federal government of today’s Nigeria may not have understood the delineated disparities within the two regions as evident in their insensitivity towards it – as they wallowed away six years of PDP glisters and of grand illusions disguised to only fool the Paris club and her associates.

Presidency’s Response To Killings Of Christians In Southern Kaduna Is Sad, Implies Connivance