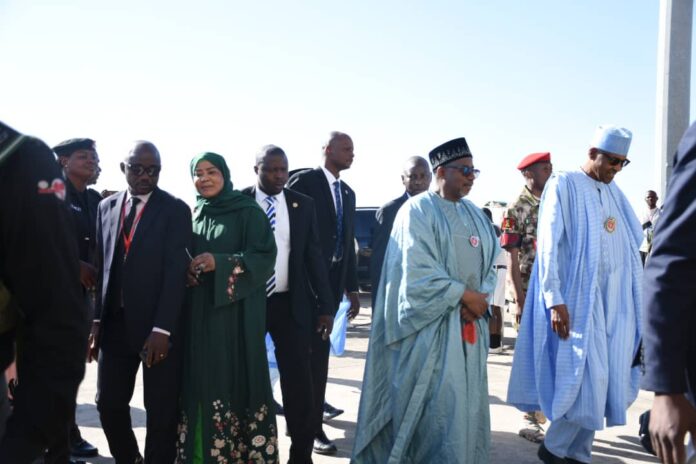 Bauchi State Governor Senator Bala Abdulkadir Muhammed has explained that
the discovery of oil and gas in the border town between Bauchi and Gombe state has never been an issue nor a cause of misunderstanding between Bauchi and the neighbouring state of Gombe.

Governor Bala stated this at the Presidential Flag-off for the Integrated Project Development of the Kolmani River II Oil Drilling by President Muhammadu Buhari.

He wants the Federal government and Nigeria National Petroleum Corporation NNPC Limited to develop an effective agreement that would promote harmonious relationship among the Oil prospective communities in Bauchi and Gombe States.

Governor assured of the State Government’s Commitment to support the Oil exploration activities for the economic prosperity of the states and the country as a whole.

He said with the Oil discovery, the states should restrengthen their relationship to leverage from endorsement by avoiding unnecessary disagreements on the ownership the Oil field.

While commending President Muhammadu Buhari and the NNPC limited for the effort to actualize the development, Governor Bala called on the Oil exploration Companies to prioritize the welfare of the host communities as part of their corporate social responsibilities.

On his part Gombe State Governor Alhaji Muhammad Inuwa Yahaya warned against hosting people with questionable character to guarantee the successful oil exploration activities and the general security of the area
Some of the host communities interviewed expressed their happiness for the development and pledged to give their maximum cooperation to the company drillingoil in the area.

The urges the government at all levels and the NNPC to provide then with social amenities like Schools , Hospitals, road and to create employment opportunities to their teeming unemployed youths