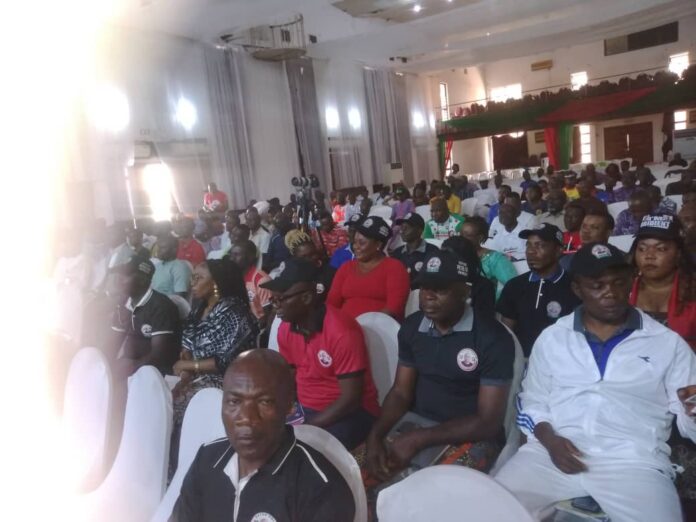 The high flying Peter Obi Support Network who is firmly backing the aspiration of Mr Peter Obi as the flag bearer of the Labour Party in next year’s presidential poll, this afternoon converged on Asaba, the Delta State capital where they held summit on “Developing Grassroots Structures for Effective People Oriented Democracy” as part of their voter education and sensitization efforts ahead the 2023 poll.

The summit which was planned to coincide with the free medical outreach by its cooperating partners under the aegis of Diaspora Medics 4 Good Governance (DM4GG) and Doctors for Peter Obi (D4PO) called on the electorate to reject and subtly resist every form of inducement, vote-buying/manipulation, and electoral insincerity so as to be able to hold their ground effectively while protecting their votes.

In her keynote address, the POSN Global Coordinator, Augusta Nneka who went down memory lane of the emergence of the Network in early May shortly after Obi declared interest in the 2023 presidential race.

She disclosed that they already have more than six thousand, seven hundred coordinators nationwide (6700). And that POSN exixts in every Ward, hamlet and family in Nigeria so far.

She therefore saw as a defeatist disused political argument by the ragtag band of opposition claiming that Obi and Labour Party lack ‘structure’, whatever that means.

According to the Global Coordinator, “…we are starting Sponsor-your-ward campaign, particularly our people in the diaspora who are not physically present.”

The Asaba summit which was coming after the Northern experience at Kaduna, then Middle Belt and now Asaba were geared towards sensitizing and training coordinators, other leaders and unit heads to enable them train electorate to recognize LP symbol, how to vote and protect their votes.

That it’s why all state coordinators were invited to the summit.

“People volunteer to come out, print fliers, t-shirts, banners, etc on their own.

Prof Utomi who was represented by the Delta State Chairman of LP, Tony Ezeagwu noted it’s first time Nigerians would do this and it catches like wildfire in harmattan.

He admitted that this stands out the candidate, Peter Obi as unique, same for the party and its symbol, that mark us out as human/people oriented.

Other speakers including Capt Augustine Okon raised issues to watch out for before, during and immediately after casting their votes so as to ensure that no one manipulated any part of the voting and collating process.

” Labour Party is the container and the labour movement is the precious liquid content.

“Establish Lp in all wards
Labour pledge… on my honour.

“Mobilize Workers, Farmers, self employed.
Artiste, comedians, teachers, unions, churches, actors, acting out a simple message.
We no de give …We no de take poverty.

“The other parties boast about having structures and labour not having structures. They are not kidding. They are talking about the structures of corruption which is vote-buying and voter intimidation. They are serious about it and they intend to deploy these forces in the coming election. We must prepare and have countermeasures against them.

” Many members of our PO Movement belong to other political parties too. We are now at crossroads and the time to make up our mind is now. The concept of voting our conscience and at the same time reaping the fruits of corruption that is Vote buying must be resisted. The temptation is great the best thing is don’t even go there. They have wicked plans. The fight is on two fronts; the mental pangs of Hunger, and the physical inducement of cash. You are the target. The plan is to provide you some mind bogging amount to declare sick and be absent on election day and someone who can be manipulated will take your place.

“We must pull down all Structures of corruption. Vote buying is the current subject.

“Provoke discussions and offer solutions on the Poverty trap in our locality.

“Who are our candidates for the forthcoming elections for Governorship, National/State Assemblies

“As we promote Peter we should also promote other candidates.
If we have doubt of any candidate we should not present him at all.

Others were from Anambra, Abia, Enugu, Ebonyi and Akwa Ibom states.