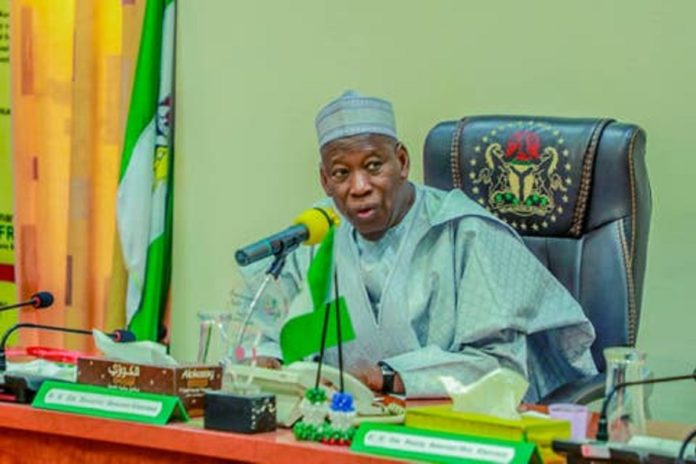 Advertisement
As the deadline of June 17 set by the Independent National Electoral Commission (INEC) for the submission of Presidential and Vice Presidential Candidates by political parties in the country, Nigerians, particularly members of the ruling All Progressives Congress (APC) are waiting patiently to know who is going to deputise the party’s flagbearer in the  general election scheduled for February, 2023.
On this issue, many pundits have made comments on whether the APC should go for the Muslim-Muslim ticket or Muslim-Christian ticket. This is not what I want to delve into. My concern here is to look at a particular individual who has the capacity to take on that responsibility.
From what I have understood, the partyis likely going for the Muslim Muslim ticket and probably from among the serving APC governors. Based on this, I believe Governor Abdullahi Umar Ganduje of Kano state is the best candidate for the Vice Presidential office.
I have my reason. First of all, he is one of the few grassroots mobilisers who have been in politics since the Second Republic when he joined the defunct National Party of Nigeria (NPN) and served as Kano State Assistant Secretary from 1979 to 1980.
He later joined the People’s Democratic Party (PDP) and aspired to be the party’s gubernatorial candidate. He later became the Deputy Governor of Kano state from 1999 to 2003 and from 2011 to 2015 in the same capacity. In addition to the Deputy Governorship, he was also appointed as the Hon. Commissioner for Local Government. He currently serve his second and last tenure as governor of the most populous states in Nigeria.
His scorecard as governor is very glaring for all to see, given the exceptional infrastructure development he brought to the commercial city. Also, if the projection by the World Bank about a decade ago that five cities in Nigeria including Kano would emerge as Megacities by 2025, then it is just a matter of time Kano, a cosmopolitan city enjoying an unprecedented growth in physical development is poised to attain that feats given the speed at which things are moving and join groups of megacity in the world.
No doubt, Ganduje has done creditably well in managing the affairs of Kano state as Chief Executive. It was Kano that gave the party the highest vote in both the 2015 when he contested the governorship election and in 2019 when he re-contested the same election. For this alone, Ganduje deserve to be given the position of the Vice President.
Ganduje is a seasoned administrator. He joined the services of the federal government in the Federal Capital Development Authority (FCDA) as Administration Officer and rose to the position of Director, Planning, Research and Statistics in 1993. At FCDA, Dr. Ganduje held various positions among which are: Development Secretary, Kwali Development Area; Sole Administrator, Abaji Area Council; and Chairman, Gwagwalada Area Council. He was appointed Executive Secretary, FCT Resettlement and Compensation.
After putting in 17 years of service in the Federal Capital Territory, Dr. Ganduje resigned and was appointed Hon. Commissioner, Ministry of Works, Housing and Transport, Kano state from January 1994 to November, 1998.
A detribalized Nigerian with patriotic zeal, Gaduje is the kind of politician that has what it takes to make Nigeria move forward despite the diverse culture and religious inclination of its people. That was why he makes Kano home to all Nigerians. In fact, it has always been his personal conviction that any Nigerian can chose to stay wherever he likes and made a solemn declaration that no Nigerian resident in the state should be addressed as non-indigene.
And in ensuring that his conviction is real, ethnic nationalities are not only considered as major stakeholders in the scheme of things, but also relishing development programmes ever embark upon by any administration in the history of the state.
Ganduje comes from the North West geo-political zone. No one needs to be told that the ruling APC renders the opposition PDP useless in Kano. Not only in Kano but the entire zone. The party was pushed to its final resting place when the former governor of Kano state, Sen. Rabiu Musa Kwankwaso dumped it for the New Nigerian People Party (NNPP). As serving governor knows the pattern of the politics more than any other person. He can muster the muscle t wrestle down both what remains of the PDP and the NNPP.
He is also a very close ally of Asiwaju. Ganduje has been one of his closest allies even at the time when some politicians are afraid to identify with him. He was one of the strongest pillars that stood with him to become the APC flagbearer.
The combination of Asiwaju and Ganduje can make a good presidency. Both of them former governors in their respective states.
Sheriff can be reached at noorsherif@gmail.com