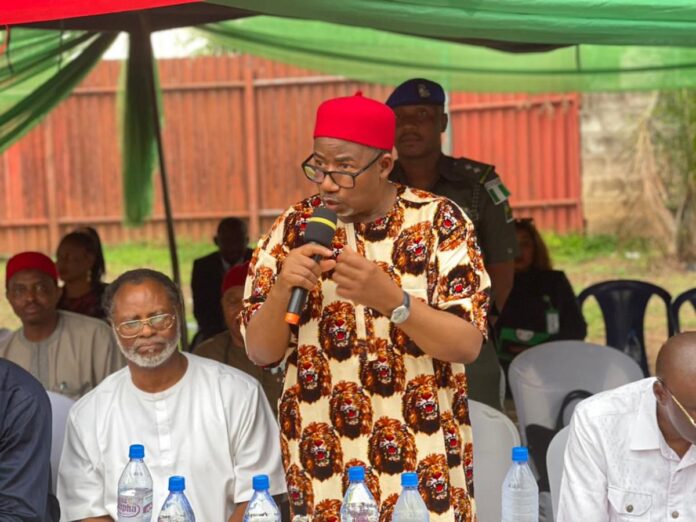 The attention of the Sen Bala Mohammed’s Presidential Campaign Organization has been drawn to the above misleading statement which appeared in several media outlets and credited to Emma Powerful, the spokesman of IPOB, in his reaction to comments made by Sen Bala Mohammed in the course of his campaigns in the South East. Indeed, Emma Powerful’s Statement is not only a gross misrepresentation of the facts but a total deviation from what exactly Sen Bala Mohammed said. Emma Powerful’s choice of words is also regrettable, unhelpful, hateful and provocative and is totally unnecessary in a civil conversation.

Now to the facts.

In the course of his campaigning for delegates for the PDP presidential primary slated for 28th and 29th May, 2022 in the South East states of Abia, Anambra, Ebonyi and Enugu Sen Bala Mohammed was effusive in his praise of the Igbo spirit of entrepreneurship and enterprise without which he said Nigeria will never make progress or be transformed into an industrial giant. Indeed Sen Bala Mohammed described Igboland as the nation’s commercial and industrial hub.

Furthermore, Sen Bala Mohammed repeated at his various campaign stops in the South East how he has benefited from the mentor ship of Igbo patriots as a budding journalist and a civil servant, and how his career as a Senator of the Federal Republic and Minister of the FCT was positively advanced by Igbo colleagues, associates and staff. Indeed, Sen Bala Mohammed still cherishes the love and close relationship of these worthy Nigerians and has nothing but a deep sense of appreciation to them and the whole of the Igbo race.

Moreover, contrary to Emma Powerful’s diatribe and vituperative remarks and insulting use of words Sen Bala Mohammed was very clear in his statements that agitations of organizations such as IPOB and One Yoruba Nation, and even the murderous activities of bandits, are mostly fueled by feelings of political and economic exclusion, the bigoted and nepotistic policies of the current clueless APC government and decades of structural and institutional marginalization of groups and entities in Nigeria.

While Sen Bala Mohammed is consistently canvassing for inclusive governance based on equity and justice done to the Igbo people and other persecuted groups in Nigeria; and while he fervently believes that the Igbo people are intricately intertwined with the rest of the country through their businesses and capital investments in all the nooks and crannies of the land – thus making them the original promoters of the Nigerian project- the Sen Bala Mohammed Campaign Organization thus wonders who Emma Powerful is speaking for or working with in this season of high wire politics.

If elected Nigeria’s president Sen Bala Mohammed will run an inclusive Nigeria First government that will be based on justice, equity and fair play; that will seek to renovate and reconstruct the governance model so as to expand the powers and financial resources available to Subnational structures and entities; and that will also rely on the talents and skills set of Igbo and other peoples in such a way and manner as to make separatists agitations a non issue in less than no time.

We thus caution Emma Powerful to always get his facts right before issuing any statements; to avoid the use of unbecoming and incendiary choice of words full of bile and bitterness; to be civil and respectful if indeed he is part of a peaceful assembly; and most importantly to avoid dabbling into partisan political battles so that his motive and the motive of his organization will be above suspicion.