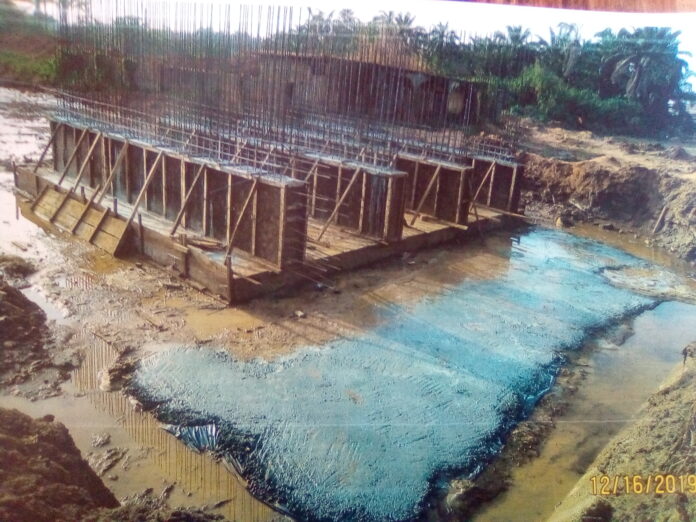 It could be recalled that the said road which its rehabilitation later attracted lots of commendations to the Caretaker Chairman Barr Asha Nnabuife was impassable especially at the Umusiome Nkpor-Uno stream/bridge point because several construction firms contracted earlier could not control the water flowing across the road. Residents living around the vicinity that own vehicles for many years had to travel miles to circumvent the bad road to access their homes.

Superstitious story even had it that the deity worshipped at the stream was responsible for damaging the road, that was before 2019.

According to Engr (Sir) Francis Okoye of JOALEN Engineering & Consultants Ltd, ” In 2019 the Caretaker Chairman Idemili North LGA, Chief Asha Nnabuife approached me narrating the ordeals experienced by motorists and other road users along the Afor- Eke Nkpor- Uno road especially at that water flow axis asking whether the road can be made passable of which I convinced him that with my wealth of knowledge and experience in engineering, providing a permanent and durable solution was possible”.

“JOALEN Engineering & Consultants Ltd had an understanding with Chief Asha Nnabuife and by November 2019 he mobilized us to commence work. The project lasted till June, 2020.Before completion, he stopped payment and started pressurizing us to finish the work saying that the project needs to be commissioned at a certain date. As he delayed to disburse fund, In order not to disappoint him on the day of commissioning and on trust I had to get supplies for asphalt on credit to complete the job”.

“After the completion and commissioning since June 2020 Asha Nnabuife refused to pay up an oustanding balance of #12, 878, 800.00(Twelve million, eight hundred and seventy eight thousand, eight hundred naira only). He no longer picks my calls nor replies our text messages to him”.

“The non payment of this outstanding balance from Asha Nnabuife, resulted in our asphalt supplier-Mr. Christian Chuka Okafor taking us to Department of State Security DSS Awka because of the inability to pay him our debt for asphalt supplied. In fact, I had to sell some of my lands to offset the debt”.

“Asha Nnabuife later wrote that the job was done via Direct labour, he has made his claims demanding for full payment from Government. Now, the council Boss is even threatening to deny contracting us inspite of all documented part payments he made to us, all to defend his ploy, making Government believe that he did the work by direct labour”.

All we are asking is for people to help us plead with Chief Asha Nnabuife to pay up the outstanding debt that he is owing us since June, 2020″, alleged Engr. Okoye.

Moreover, pictures speak for themselves. We have proof that we’ JOALEN Engineering & Consultants Ltd’ undertook the project,the bank statements of part payments are also available”, Engr. Okoye stated.

When the Council boss, Chief Asha Nnabuife was contacted concerning the issue of incomplete payment he declined comment saying that he does not listen to gossips.