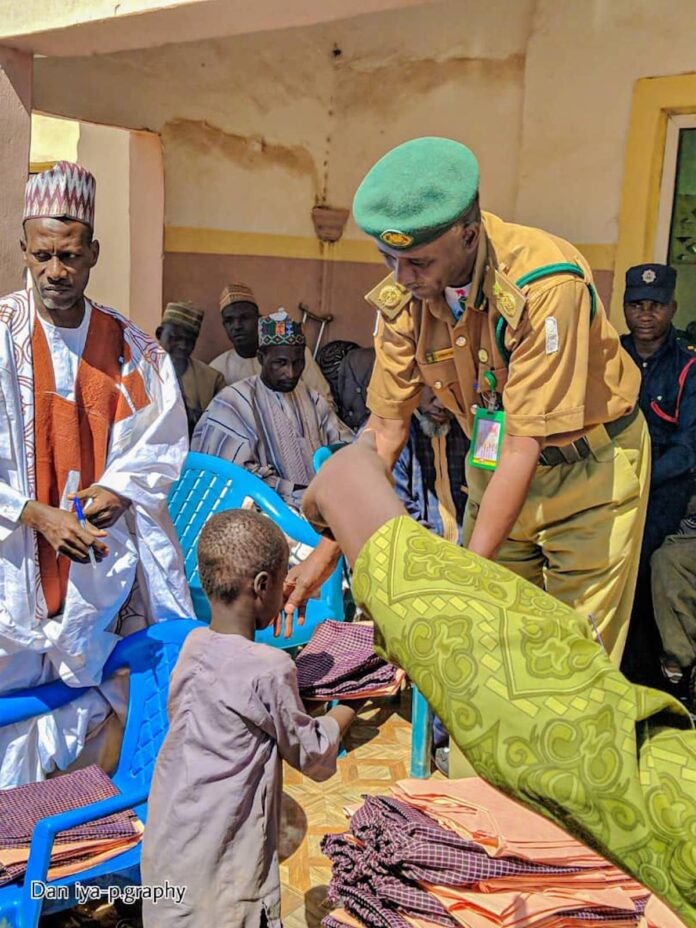 The first phase of the project feature the distribution of school uniforms to 50 orphans and vulnerable pupils across the 20 local Government Area of Bauchi State.

Flagging off the exercise at the conference hall of Katagum Local Government Secretariat in Azare state Coordinator of AYCC.

Ambassador Usama Ibrahim Aliyu said the Project is tagged “Ali Kwara Charity Project” to provide succor to the orphans and less privilege in the society.

Usama said “as earlier pledged during the launching of magazine that the funds realised will be use in helping the orphans, poor and the needy as in line with the ideals of late Ali Kwara, we are making history we didn’t realized huge amount that will be enough to build a mosques or hospital like it’s in the ideals of the late legend hunter,but we realize a token that will bring succor to the needy through the provision of school uniforms.
He said “. The project will feature distribution of school uniforms to 50 students (orphans) in each local government across Bauchi state, construction of water borehole in some identified areas and other projects which are in line with the ideals of late Alhaji Ali Kwara”.

He said the distribution of school uniform will start with Katagum Local government then in Itas/Gadau Local government, and others will follow by the Grace of God”
Usama said the orphans and the needy where identified by the communities and school headteachers.

Hr urged the people who are yet to redeem their pledge to the association to do so in the Best interest of unity and development of our society, and solicit for more support and prayers in order to succeed.

In their separate remarks at the occasion Head of Correctional Center Azare Alhaji. Musa and Sheikh Gwani Tsoma, thanks the AYCC for the kind gesture and advice the beneficiaries to make the best use of the uniforms.
They appeal to government, philanthropists and other organizations to emulate Arewa Youth Consultative Council for the social wellbeing of the society.

Late Ali Kwara was from Azare, Katagum local government area of Bauchi State.
when he was alive hespecialised in fighting criminals voluntarily. Singlehandedly, he arrested kidnappers and presented them to the agents of the law. Apart from being a career hunter who fought the most dangerous animals back-to-back, he was a philanthropist, friendly, approachable and responsive.

This protagonist played unforgettable roles that made his antagonists submitted to him to further become his disciples. Notorious criminals of the recent time salute and comprehensibly failed to get the tactics of the giant Kwara. He was a chameleon. He could be described as a combatant without official uniform. He was a complete ‘anti-robbery squad’.