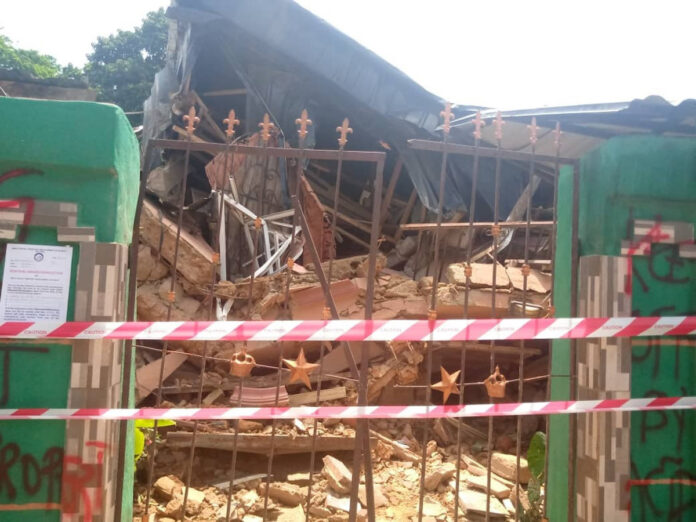 A middle-aged Nnewi housewife, Mrs Gladys Ojukwu, early morning Tuesday, August 31,2021 escaped being crushed by a 2-storey building under construction which collapsed from an adjoining compound next to hers.

A substantial part of the building which has been a subject of legal dispute between the owner(Chief Benjamin Okeke) and the family of Comrade Clement Ojukwu(husband to Gladys), both who were said to be cousins, crumbled at about 745am Tuesday morning when everyone in the neighborhood were said to be getting set to go out for the day’s business.

According to Comrade Ojukwu, “I left home at about 07.15am this morning. But about 40 minutes later I got an urgent call from one of my neighbors, Mr Samuel Ejizu for me to rush back home immediately. That the new multi-storey building beside my house which was under construction had collapsed.

“ Sounding hysterically disturbed, Mr Ejizu said that no one knows whether my wife who was cooking in the family kitchen when I left was trapped under the debris.

“I told him to please mobilize people to assist in searching and ascertain that my wife was safe, before I rushed back home from where I had gone to. I was elated when she called me about five minutes later informing me of how she narrowly escaped death as the building under construction in the next compound collapsed.

“Sadly, the owner of the building is a brother and friend, Benjamin Okeke(popularly called Benjy Japan). I had in the progress of the construction called and intimated him that it was not only close to my house but that it was dangerously transversing into my compound/building.

“His response was that his father told him that one talks about boundary on the ground, not up or in the air. And that on the strength of that he knows not what am saying. So as he continued with the project, finished the first decking, and started the second, I was forced to go to court to stop him.

“That is the stage where we were when this happened today, …”, he pointed out.

When effort was made to speak to Okeke, whose mansion was in the neighborhood on the Benjy Okeke Street, he was said to be on the run. That no one has seen him since the unfortunate incident occurred earlier in the morning.

It was also argued by onlookers and neighbors to ascertain whether any of the laborers who had reported for work for the day was not trapped under the rubbles.

Also, from the mangled structure, it could be seen that there was no proper design, building lacks approved plan, quality/adequate materials, qualified site engineer and other personnel..

Efforts were still being intensified to get the reaction of the Anambra State Maternal testing unit of the Ministry of Works /Housing as at the time of filing this report.